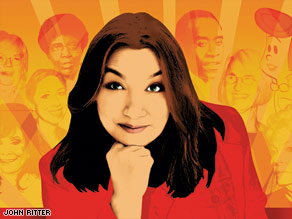 Lisa Kogan says when one woman isn't feeling all that invincible, another will take the wheel.

For those of you who were too busy trying to grow out your horrible Jane-Fonda-in-Klute shag to pay attention, the soaring declaration that made women all over America want to rally against injustice, macramé a belt, and stop serving beef Stroganoff at dinner parties went like this: "If I have to, I can do anything. I am strong! I am invincible! I am woman!"

My anthem would probably go, "If I have to, I can maybe do lunch. I am on Lexapro! I am responsible for Eleanor, the class hamster! I am woman!" This is the kind of lyric that explains why I am so seldom called upon to produce a hit single, but we'll take a much closer look at that in my upcoming "What's Celine Dion Got That I Haven't Got?" column. This one is about a few good women.

I like women. I like them as much as or more than I like almost anybody. But the women I like best aren't always strong, and they're certainly not invincible. Oprah.com: Meet women who are changing the world

They can spot a scam, a lousy doctor, and a crummy boyfriend in under ten seconds. They've perfected the withering stare that makes a nasty salesperson, flight attendant, or coworker fold like an origami swan.

My favorite women may feel bad about their necks, but they feel pretty damn good about their legs. They do not trash their ex-husband's new squeeze monkey even if she happens to be eight months younger than their eldest daughter; they limit the amount of money spent sucking up to stepchildren; they try really hard to wish everyone well. Oprah.com: Five friends every woman should have

They've never met a carbohydrate they didn't want to have a close personal relationship with. They brake for sex, sleep, and solitude, cashmere, caffeine, and Joan Didion. They've got nerves of steel, the courage of their convictions, and excellent footwear. They're sugar and spice and everything I aspire to. They remain cautiously optimistic.

Here, in no particular order, are a few examples of the best and the brightest females I've come across.

She might have been born a coal miner's daughter, but Loretta Lynn raised herself up to be an audacious provocateur who's spent nearly 50 years turning out serrated country classics like "Don't Come Home A-Drinkin' (with Lovin' on Your Mind)," "The Pill," and "You Ain't Woman Enough (to Take My Man)." Her 2004 hit, "Van Lear Rose" (in which she teamed with White Stripes front man Jack White), came at age 69.

When I'm 69, I plan to be watching reruns of "Who Wants to Be a Millionaire" and obsessing over my cholesterol ... actually, that's pretty much what I'm doing at 46.

Long before those gorgeous Dove girls stripped down for the camera, real women of every age, shape, and color dressed up in this designer's easy, modern clothes. Eileen Fisher seems to have invented Garanimals for grown-ups -- everything works with everything else and you don't need to sell your bone marrow to buy a skirt. Were it not for my sister Eileen, I'd be forced to walk around naked but for an old pair of Doc Martens -- and, trust me, nobody wants that.

She understood female friendship, complicated men, and domestic engineering better than most of us ever will. I don't love Lucy, and I never dreamed of Jeannie -- but Wilma Flintstone could probably get us out of Iraq and end global warming simultaneously. The question is this: Are we as a nation ready for a cartoon cavewoman in the White House?

And speaking of the White House, I'd like to thank Chelsea Clinton for appearing to be a normal human being when it would be oh so easy to go a different way. If anybody's earned the right to exit a limo without underpants, lord knows it's her.

There are no words for how grateful I am not to have to watch as she checks out of rehab to attend a Golden Globe party or serves 41 minutes in prison for shoplifting a leg of lamb in her Marc Jacobs bag or fights for custody of Anna Nicole Smith's baby or weighs in at 83 pounds of solid denial. Bless you, Chelsea Clinton, for never presenting Victoria Beckham with anything at the MTV Awards.

I know Don Cheadle isn't a woman, but I just saw a documentary called "Darfur Now" and it made me like him so much that I've decided to bestow upon him an "Honorary Girl" title. He is whip smart and fiercely committed to alleviating misery, so I say we hand him a DVD of "The Way We Were," teach him the secret handshake, waive the membership fee, and start letting him into the meetings.

"My faith in the Constitution is whole; it is complete; it is total. And I am not going to sit here and be an idle spectator to the diminution, the subversion, the destruction of [it]." The late, great congresswoman Barbara Jordan said that. I only wish other Texas politicians shared the sentiment. I miss her. And I miss Ann Richards and Molly Ivins, too. I miss nobility and wit and idealism and style. And more than anything, I miss being the country that thinks waterboarding is a really bad idea.

I met Jan Frank in kindergarten more than 42 years ago. We starred in the Fred D. Leonhard Elementary School production of "The Wizard of Oz," she as the Wicked Witch of the West, me as Dorothy ... okay, fine, Suzie Daitch was Dorothy, I was Winkie Girl Number Seven, and for those of you playing the home game, that's a notch below Munchkin ... not that I'm bitter.

We read "Go Ask Alice," we survived our Bat Mitzvahs and driver's ed (which went better once Jan was able to stop shrieking long enough to take the wheel from me), we broke up with boyfriends, buried our grandparents, raged at our mothers, erupted in geysers of emotion, got our teeth fixed and our complexions under control.

I was the maid of honor at her wedding and she was at the hospital before my daughter was six hours old.

As I sit typing away on this rainy Monday afternoon, Jan, my lovely, dynamic partner in crime, is at a different hospital. Right about now, she is having a rare form of sarcoma cut out of the area just beneath her left collarbone.

I wish that I were with her, but she's got the world's best husband for that particular assignment and so I do what I know how to do ... I wait patiently, worry endlessly, and pray to a God whose existence I doubt regularly.

I'm tired and pissed off today because it's pouring and because Jan has three magnificent boys at home and because this should not be happening to my oldest friend. But then I remind myself that if we have to, we can do anything. We are strong, and when one of us isn't feeling all that invincible, the other will take the wheel. We are women.

By Lisa Kogan from "O, The Oprah Magazine," February 2008