(OPRAH.com) -- One portion of macaroni and cheese. One slice of chocolate cake. One pair of svelte black pants. Do some very simple, if highly emotional, addition and subtraction, and you arrive at a whole new way to see yourself. 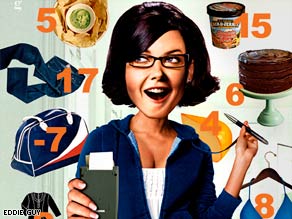 The first documented instance of my distorted body image is an entry in my fourth-grade journal. "I just ate three cookies," it says. "I feel fat."

There is no way that I actually was; my jeans, although dorky, fit just fine. Nevertheless, the disconnect grew worse as puberty approached -- especially in eighth grade, when the body mass index (BMI) entered my life. This is a formula that tells you whether you need to drop pounds -- and while it's generally reliable, it doesn't take body composition into account.

At 5'4" and 140 pounds, I'm close to the overweight category, but that's only because I've got heavy bones and a sprinter's thighs. Every time I calculate my BMI, I get angry at myself, even though I'm aware that I am in good shape.

But what do feelings have to do with numbers? Most women know that it is possible to immediately gain 15 pounds by eating one pint of Ben & Jerry's. And when it comes to your butt (which can enlarge six sizes in the wrong pair of jeans), the rules of physics no longer apply. Oprah.com: Start loving the way you look

We need a better way to quantify these fluctuations -- a formula that goes beyond your BMI and calculates the feel of overweight. So I propose the personal body image index (PBII).

The general idea is as follows:

• Start with your weight.
• Subtract seven pounds if you have just worked out.
• Add five if you've single-handedly finished a plate of guacamole and chips; four for macaroni and cheese; six for death-by-chocolate cake.
• Subtract 10 pounds if people nearby are fatter than you.
• If you're wearing black pants, subtract two; if in a bathing suit, add eight.
• If you are more than seven years older than the group average or are surrounded by bikini-clad undergraduates with toned stomachs and cellulite-free thighs, add 20.
iReport.com: What kinds of things do you do you stay fit?

I don't advocate letting the PBII dictate how you live your life; it could turn you into one of those people who spend their beach time camouflaging their lower halves with sarongs. But once you acknowledge that the PBII exists, you can take steps to improve your score. Some suggestions:

Hang out with people older than you, preferably much older. This has three benefits:

(a) You probably have fewer varicose veins than they do.

(b) Truly old people are inspiring; they tend not to give a damn about what they look like in bathing suits.

(c) Except for my elderly neighbor, who once greeted me by announcing that I'd gained weight in my face, older people are usually effusive with compliments. My friend Luba, who lived to 99, used to tell me how beautiful I was every time I saw her, even though she was blind.

Watch those college girls on the beach. Notice how often they adjust their bikinis and glance at themselves in other people's sunglasses. They are totally insecure. Granted, they are probably also judging you, but still -- I find their self-doubt liberating. Isn't there some cosmic limit on how much body insecurity the universe can handle?

Embrace the bikini now: "Look how skinny I was!" my mother says every time she sees a picture of herself from the 1970s. "I thought I was so fat. I was 130 pounds." My mother, now 66, is living proof that you should do everything in your power to enjoy your body as it is right now so you never have to look at an old photograph of yourself and wish you'd spent more time in a two-piece bathing suit.

When it comes to my own PBII, I still have a way to go. It doesn't take too much extra chocolate to convince me that I should never be allowed to wear shorts. But recognizing the illogical logic behind my self-image helps me to control it better. And by my calculations, that's worth subtracting at least five pounds.

By Catherine Price from "O, The Oprah Magazine," July 2008