Confronting the killer of your loved one

(Oprah.com) -- If someone brutally murdered someone you love, would you have the courage to confront them? Would you even want to? For some victims of violent crimes, these meetings are vital to the healing process. 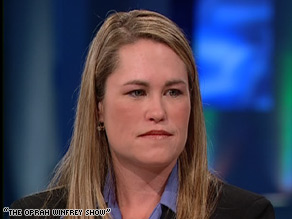 Jennifer met with and forgave the man who killed her father.

On February 13, 1988, 17-year-old Jennifer slept in her bedroom as her father, Franklin Kennedy (known as Ken) was forced into his bed, stripped naked and brutally stabbed to death.

According to news accounts in Des Moines, Iowa, Ken -- who got divorced from Jennifer's mother after he announced he was gay -- attended a dinner theater with a male friend. He then went to a part of town called "the gay loop," where he met two men who he brought back to his apartment. The two men murdered Ken and robbed his home. Jennifer found her father's body the next morning.

Two weeks later, two young men, Billy Green and Gary Titus, were apprehended. They were later convicted of murder and are both serving life sentences.

Over the next 16 years, Jennifer married and had five children. Still haunted by her father's horrific murder, she enrolled in a "restorative justice" program, designed to help victims and their families heal from the devastation of violent crimes through meetings with the offenders.

After meeting with a mediator who helped her prepare, Jennifer is ready for a face-to-face meeting with Billy, who is serving a sentence of life in prison without parole. Jennifer says she's nervous and scared to meet him on his own turf. "I [am] facing my fear," she says.

When they sit down, Billy tells Jennifer what transpired that night. He and Gary were out in search of alcohol when they met Ken, who invited them to his house. "He gave us the stuff to drink and put in some type of film on the TV. It was a gay film," Billy says. "So I'm thinking maybe Gary told your father he was coming there to have, you know, some type of relations with him or something that I didn't know."

Billy says he then went to the kitchen and grabbed a knife. Billy and Gary then tried to rob Ken, but he refused to back down. A fight ensued, and Billy says he then pulled out the knife and stabbed Ken, who died quickly.

Billy insists that he and Gary did not go to the house that night with the intention of killing Ken and that they had no desire to hurt Jennifer. "After your father was killed, we opened the door and [saw] you in bed," Billy tells Jennifer. "If that was our purpose, we could have killed you right in the bed right there."

As their meeting ends, Jennifer reads a statement to Billy. "I have traveled a very, very long journey. ... Part of my ending piece to my journey is to tell you that I forgive you. I forgive you for what took place that night. I forgive you for that; I've made peace with that. I had to because I was so angry and I was so hurt. He was such a great person. Just because he was gay didn't mean he was bad. I've forgiven you for that. Maybe you can find some peace in that, because I have."

"I hope your forgiveness -- for you telling me forgiveness -- gives you peace in your life for your family, for your kids, for your husband, because I'll never forgive myself for what I did that night," Billy says. "I've hurt a lot of people that didn't deserve to be hurt. I'm sorry. I apologize for taking your father's life. I know it's just words and I can't bring your father back, but my sole purpose was to come here today to let you know from my heart I'm sorry."

Jennifer says meeting with Billy brought her some peace. "He was kind of the final piece of the puzzle that had to be put together," she says.

Her husband, Rico, was initially against this meeting. "I thought this guy was angling for something," he says. "I didn't want this guy to get anything. ... The only reason I let Jen do it is because I finally came to the realization it wasn't about me -- it was about Jen."

When they leave the prison, Rico realizes the meeting has been a positive one. "You could tell Jennifer ha[s] been freed from something," he says. "Her whole attitude [is] happier. I learned maybe I ought to think about the other side a little bit. ... I realize other people need to get forgiveness for themselves." Oprah.com: Learn how to forgive

Forgiving daddy for killing her mother

When Angela was just 4 years old, her mother, Tonya, was strangled to death. The person convicted for the brutal murder was Angelo -- the man Angela was named after, the man she called "Daddy." Angelo met Tonya when she was pregnant with Angela, and he was her father figure for the first four years of her life.

Like Jennifer, Angela had many unanswered questions about her mother's death. And the only man who had answers was Angelo. "I'm close to the age my mom was when she died. I kind of want to get this done soon, at this point in my life," she says. "If not now, then when?"

While Angela met with a mediator to prepare for her meeting with Angelo, her family was supportive but worried. "At first we were totally against it," Angela's aunt Roberta says. "We were afraid that he might say something to hurt her even more than she had already been hurting. She was so determined, after awhile we just said, 'Well, we have to stand behind her and support her.'"

When she finally meets with her mother's murderer, Angela first asks Angelo to admit that he killed Tonya. "Growing up, people would always tell me you didn't do it," Angela says. "Did you do it?"

Angela says that not knowing the details of her mother's murder has been unbearable for her. She asks Angelo what happened that night. "It happened just quickly. It's like I blanked out, and I came to and I had her in my hands," Angelo says. "I've asked God so much so many times to take that night back. She was my best friend. I don't know how it happened, how I let it happen."

During their meeting, Angelo reads a statement to Angela. "I apologize to you this day knowing full well my apology does nothing to assuage your grief. I can only hope that by hearing from me the truth about that night that you will somehow be able to close a significant chapter in your life and that you will be able to move on with plans for your future. At one time in your life you used to call me 'Daddy.' So, no, I'm not being brave by agreeing to this meeting. I'm just being a man for once in my life. I have no expectations of our meeting today other than to help you achieve the closure you asked for in your letter."

Angela says Angelo's answers help give her closure and a measure of peace. "I've forgiven him because I know that me hating him will not get me anywhere," Angela says. "Hatred will eat your life."

The mediation, which Angela's family was originally hesitant about, also helps answer a question that plagued the family for years: Did Angelo really kill Tonya?

Angelo had originally pleaded not guilty in court, but he was convicted on DNA evidence. Still, Angelo continued to deny killing Tonya. He didn't reveal the truth until meeting with Angela. "Especially being from a small town, people would always say, well, 'Angelo didn't do it,' or 'So-and-so did it,' whichever," Angela says. "To hear him say that, it just filled that hole so much."

The confession even helps her aunt Roberta, who is Tonya's sister, gain a measure of respect for him. "Because he gave not only her closure, he gave us all closure, which allowed us all to move on with our lives," Roberta says.

Meeting the hitman who tried to kill her

One day when Sue, a newly divorced mom, was inside alone while her two children played outside, a man came to the door looking for yard work. Sue showed him around the yard and let him into the house when he asked to use the phone. She had no idea the man, Dale, had been hired to kill her. Dale shot Sue in the stomach, but, miraculously, the gun jammed and he wasn't able to fire any more bullets.

Sue ran to the neighbor's house while Dale escaped. "I saw the cartridge on the ground. I heard a voice in my head telling me, 'You've been shot and you need to get out of the house,'" Sue says. "I got up and ran for my life."

Three months after the shooting, Dale was arrested and convicted for attempted murder. He served 12 years in prison.

Even with Dale behind bars, Sue didn't feel safe. "I had nightmares for several years of people chasing me with guns," she says. "I was so scared all the time, I carried a loaded gun in my purse for about two years."

When Dale was released from prison, Sue received a shocking phone call. Dale wanted to meet her in person and apologize for trying to kill her. Oprah.com: When Dale and Sue first met

"I was back in jail again, looking at another term in prison," Dale says. "I had basically hit bottom and didn't like myself. Part of the 12-step drug program I was going through is to make amends where possible. So that's why I called Sue the first time, to tell her I was sorry for what I had done."

Dale and Sue had four restorative justice meetings in the summer of 2002, four years after Dale initially called to apologize for the shooting. "I knew it was divinely guided, and I felt it was really important to go and participate for the healing that was necessary for the whole family and Dale's family, as well," Sue says.

Dale says Sue helped him forgive himself. "There's a lot of emotions. Sue had forgiven me, which helped me to forgive myself for what I had done," Dale says. "Because I lived years with the guilt, the shame of what I'd done."

Dale's daughter, Heather, also reached out to Sue. "We went through an experience that was traumatic," Heather says. "I wanted to meet her and experience a healing process together because no one else really understands it. And we've got a great friendship through it."

Heather says she didn't know until the first mediation that her father was a hired assassin, and she thought Sue would hate her and her family because of what Dale had done. "I said, 'Oh, we don't hate you. You're a victim also of your father's crime,'" Sue says. "And she was. And she was so articulate for 17 years old."

Sue says she has forgiven and hopes that Heather's suffering will be eased.

Dale, Heather says, is now back in prison.

Sunny Schwartz, an attorney who heads the Resolve to Stop the Violence Project for the San Francisco Sheriff's Department, says 90 percent of victims in a 5,000-person study wanted to face their attackers. "The majority of people, survivors, want to know why, for the offender to hear their pain and ultimately to be validated with their [authentic] apology," Sunny says.