(LifeWire) -- When it comes to women, says Mark Tardif, 44, sometimes it's hard to tell what they're thinking. Last year, the college administrator from Waterville, Maine, met an attractive woman at a conference and was having a great conversation over a glass of wine. 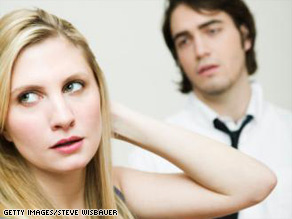 Then something unexpected happened: "She undid the plastic clasp holding her hair in a bun, letting her blond hair fall, then flipped it side to side."

Tardif was confused. Could it really be a sign of interest, he thought? No, he finally decided. "I told myself to get real and put it aside," he says.

And so when the evening was over, there was no lingering, just a polite good night.

"She stood there silent, glass of wine in her hands, with a look of puzzlement on her face," he recalls. "As the doors closed, it hit me like a ton of bricks that she was shocked that I hadn't followed her back to her room. The next day was awkward between us."

According to researchers at Indiana University and Yale University, Tardif isn't the only man flying blind. Women are better than men at interpreting facial expressions and body language, at least when it comes to images of women, according to a study published in the April issue of the journal "Psychological Science."

In the study, researchers tested 280 heterosexual male and female students at Indiana University in 2006 and 2007, asking them to sort 280 photos of women (all pictures were full-length shots of fully clothed subjects) into one of one of four categories -- friendly, sexually interested, sad or rejecting.

Men who viewed images of women misidentified 12 percent of the images as sexually interested, the study found, while women mistook 8.7 percent of images.

Researchers chalk it up to women's more developed ability to read others' signals, and men's tendency to oversexualize social situations or miss the message entirely.

Ryan Dodge, 26, admits that when it comes to reading women's signals, he sometimes strikes out. "I think a girl on the subway is checking me out," he says, "but then I realize she's watching the guy next to me while he's stealing my wallet or something."

The Brooklyn, New York, resident -- who writes about his dating life on the Glamour.com blog Single-ish -- has one signal down, though:

"A telltale sign is when she laughs at all of my jokes, because I know I'm not that funny."

It all boils down to men and women's communication styles, says Charlotte, North Carolina-based relationships coach Kathy Stafford, author of "Relationship Remorse: Mistakes Women Make When Shopping for a Man."

"Men are more direct," observes Stafford, who also runs the dating and relationship advice Web site DearKathy.com. "They pay more attention to what is said, not how it's said."

Case in point: If a woman is giving "I'm interested" signals -- touching a man on the arm, for example, or maintaining eye contact and smiling while talking -- but then talks about how she's not really interested in dating, the man's going to believe her words, Stafford says, not her actions.

"'Confusing,' might be the word that best sums up single life today," says Trish McDermott, a dating expert and "vice president of love" for Engage.com, a dating Web site.

"For all the communicating singles are now doing using the plethora of social media available to them, men and women still aren't necessarily hearing each other. Most men still think they should pay for the first date, but most women don't agree. On the other hand, women still expect gentlemanly courtesies such as having the door held open for them."

And what do guys think?

"Part of what makes it so challenging is that no one can agree on what the signals are -- every woman is different," Dodge says. "I've always heard that if a woman glances at you three times in less than a minute, she's interested."

'He wouldn't take the hint'

It helps if the words are direct but sometimes a desire not to hurt another person's feelings can send the wrong signal.

Lindsey Jesch, 29, who works in investor relations in Seattle, was recently out at a club with some of her girlfriends when a man approached their table. "He asked if he could 'infiltrate our conversation,' because we looked like we were having fun and 'his friends were really boring'."

Trying not to laugh at his creative pickup line, Jesch and her friends -- who are all engaged or in relationships -- attempted to politely decline his advances. "We tried to let him down easy, saying we weren't talking about anything interesting, but he wouldn't take the hint." That is, until one of the women mentioned her boyfriend.

While Jesch says that she and her friends weren't leading the guy on, she can see how he might have gotten off track. After all, she says, women can be just plain confusing. "I definitely think women give guys mixed signals, and it is almost always because our niceness in trying to let them down easy is confused with interest," she explains.

Wondering what women are thinking? Two experts give their translations of female body language:

• Is she licking her lips? "When a woman allows herself to feel nervously excited about the possibility of you, the ensuing physiological response can be a dry mouth and lips," says McDermott. "Women also know that licking their lips can drive men wild and certainly get their attention."

• Take a glance at her shoes. Is she crossing her legs and playfully dangling her shoe as she glances your way? If so, here's what it might mean: "She's calling attention to her legs and hoping you like what you see," explains McDermott.

• Has she touched your arm or hand? "One of the strongest signals a woman can give is a touch on the arm or hand," says Stafford. "If she does this, it's time to get her digits."

• Look for the lean. What's her posture like? If she's leaning in, you're in luck. "It's a signal that she feels safe in your presence and wants a little more of you than every other woman in the room is currently getting," says McDermott.

• Is she playing with her hair? This could mean that she wants to look good for you and is hoping you find her attractive, says Stafford.

"I think women know it's in their best interest to keep us guessing," says Dodge. "I may be betraying my fellow men by admitting this, but we like a challenge."