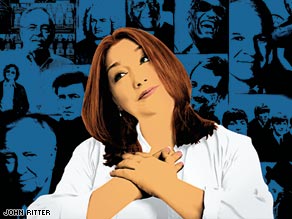 Lisa Kogan has a long list of "Plan B" boyfriends.

Okay, not two, but there is this one little thing about men that I do know with crystal clarity: I know what I like.

Needless to say, what I like, love and cherish above all others is my own man, Johannes Labusch. He was a friend for quite a while, and then 14 years ago this month we went to a museum together and I stood there looking at a Giacometti sculpture through his faded denim gray eyes, and he was so funny, so astute, so sexy, so unpretentious that somewhere between the cafe and the gift shop, I was a goner. And (despite the fact that a mere 20 minutes ago we had an unbelievably irritating phone conversation) I still am.

Suppose he falls off an Alp or chokes on a chunk of chocolate? Do you have any idea how many human beings perish every single year in fondue-related accidents? Well, neither do I, but suffice it to say the statistics are probably off the charts.

Anyway, forget Zurich: What if when Johannes is here in New York, he were to slip on one of the many, many wet towels he leaves lying all over the floor after his shower and then crash headfirst into the guitar he has such a hard time pulling himself away from even though I'm late for work and could really use some help getting our daughter dressed (did I mention that we had a big fight 20 minutes ago?), then who could I fall truly, madly, deeply in love with ... after, you know, a suitable period of mourning? I've spent the last 20 minutes giving this matter considerable thought. Oprah.com: Men! What are you thinking?!

Men I could fall hard for ... after, you know, a suitable period of mourning:

• CEO/mensch Jim Sinegal came up with this utterly novel theory: If you hire good people and then treat them with respect, nice things happen. The nice thing is called Costco, a place where workers earn an average of $17 an hour and pay just 9 percent of their health insurance costs, a place that sells everything from Dom Pérignon to diapers at bargain prices.

In a world where CEOs of billion-dollar companies require salaries to match, Jim (as every employee calls him) takes home an annual salary of $350,000. I don't care if he's not a billionaire, Jim and I will live on love -- and perhaps a 22-pound wheel of Jarlsberg cheese for the low, low price of $180. And when our days dwindle down to a precious few, we'll go online to the funeral department and get a terrific deal on matching, high-quality Costco caskets.

• Supremely skilled, deeply compassionate, cucumber-cool Andrei Rebarber, Daniel Saltzman and Samuel Bender are the obstetricians who pulled me through a harrowing high-risk pregnancy. I'd like to take this moment to declare my undying love for these medical miracle workers and to offer a brief apology.

"Gentlemen, as you may be aware, the birth process is often a touch uncomfortable in an I'm-being-torn-limb-from-limb-by-a-horde-of-rabid-wildebeasts-while-someone-sets-all-of-my-internal-organs-on-fire-and-stomps-up-and-down-on-my-tummy kind of way. It is possible that in the course of my 22-hour labor I may have inadvertently referred to one or more of you as a motherf*@# ing, gravy-sucking weasel. I see now that this was an unfortunate choice of words to use when requesting an epidural, and I am deeply sorry."

"It is further possible that you might have been bitten, kicked, pummeled or clawed at in a manner that can best be described as 'satanic.' Again, I am beyond sorry. Finally, rest assured that I now fully understand that you were not in any position to prescribe heroin even if it were called for, and that any comments I might have made with regard to your manhood, your immediate family or your innate sense of common decency were just terribly, terribly wrong."

• Some desire DiCaprio, others crave Clooney, I have a little thing for Desmond Tutu, or as I like to call him, Archbishop McDreamy. What can I tell you? I've always been a sucker for integrity and twinkly eyes, which is why I'd also like to send a quick shout-out to and Walter Cronkite.

• I never thought of myself as a particularly vain person. In fact I sort of prided myself on having a decidedly undiva-like attitude. But all that went out the window when I realized my face had to appear in this magazine every month. It turns out I'm ridiculously insecure and once lost an entire night's sleep worrying that my wrists looked puffy. Enter John Ritter. Not the guy from "Three's Company." No, the John Ritter I love illustrates this column.

Here's a tip. If you're ever going to be viewed by millions of people on a regular basis, forget hair, makeup and the South Beach diet -- get yourself a man who sees grace where you can see only crow's-feet.

• After 46 Thanksgivings, I still can't make a good turkey. Mine was so undercooked last year that several guests suggested a really excellent veterinarian could probably get it up and gobbling again. I love a man who can cook and I love a man who can write, and Anthony Bourdain is a man who can do both. So come next year, Chef Bourdain can be in charge of cranberries and column ideas.

• I believe I could listen to Tom Waits singing "Take It with Me" every rainy Sunday for the rest of my life. I also love Johann Sebastian Bach, Ray Charles, Randy Newman, Stephen Sondheim, Johnny Cash and several Beatles. They all make me happy, and they all break my heart. And when you think about it, what else do you want from a musician?

• One hot summer night at the end of the '70s, I sat in a 15,274-seat amphitheater just outside Detroit, Michigan, and watched a wild and crazy guy in a white suit perform "the disappearing dime trick." It was absurd and ironic, and exceedingly funny -- it was the bravest act of comedy I'd ever witnessed. It was Steve Martin.

He removed the arrow from his head a long, long time ago, but like comic geniuses from Buster Keaton to David Sedaris, he still performs a remarkable sleight of hand. Rent "Roxanne," read "The Pleasure of My Company," or "Shopgirl," or a short story from his "Pure Drivel" collection called "Hissy Fit," and see for yourself how, time after time, he manages to catch the pedestrian moment -- the ordinary gesture -- and wring it into an expression of exquisite longing. He was, is, and will always be my ideal combination of contemplative and cuckoo.

Finally, there's the 20-something model/actor/Barneys clerk who sold me a pair of sunglasses I couldn't afford last Saturday morning. Shallow? You bet, but Walter Cronkite will only take a girl so far. I know Sunglasses Guy is an impossible fantasy, but you have to admit, he's a better option than Johann Sebastian Bach.

Besides, I think there's something to be said for coming up with a list of impossible fantasies. Woman --at least this one --cannot live by reality alone.