Santas can freak out screaming toddlers

(CNN) -- He's a huge, strangely dressed man who sneaks into people's homes at night, then yells, "Ho! Ho! Ho!" at the top of his lungs. Who wouldn't be afraid of Santa Claus? 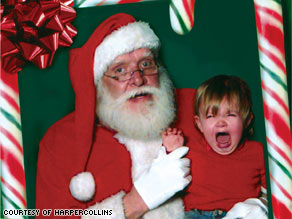 "A 2-year-old knows what a regular person looks like, and Santa ain't it," author Nancy Watkins says.

Authors Denise Joyce and Nancy Watkins know at least 250 toddlers who are. The two recently published a book called "Scared of Santa: Scenes of Terror in Toyland" that shows photos of children on St. Nick's lap -- most of whom are desperate to leave.

The project started at the Chicago Tribune, where both Joyce and Watkins work. They asked readers to send in their photos and got an overwhelming response that's still going strong. Last week, the Tribune's "Scared of Santa" Web site had 2 million hits.

An agent saw the journalists' success and proposed the stocking-stuffer book. Now anyone can enjoy the chapters labeled "Titans of Tears," Misery Squared" and Watkins' favorite: "Santa Claus Is Comin'... After You."

CNN talked with Watkins about her love of photos of scary Santas and why she never forced her son onto Santa's lap. The following is an edited version of that interview:

CNN: How did the original idea for this book come about?

Nancy Watkins: It started out as a reader interaction feature for the holidays. We put the call out to readers to have them send us their photos. We were not the first people to do this, I must confess. The Palm Beach Post did it first, and then they shared the idea with other papers in this organization we belong to.

So that's how it came about. And we got a great response in print. Then it really took off when it went online, and it's still going pretty strong at the ChicagoTribune.com/scaredofsanta.

CNN: Do you have any favorite photos or parts of the book?

Watkins: Well, you know, that would be like choosing a favorite child. But in general, I think Denise and I both love the photos of the scary Santas. We have a whole chapter devoted to the Santas you would just not want to run into in a dark alley, and you can see why the kids would be scared of those guys.

Especially the vintage ones. I love the ones that are from the '50s and '60s, and we've got some that go as far back as the '20s. Those are just really fun to look at and see that being scared of Santa just goes back many, many decades -- probably to the dawn of time.

Watch Watkins talk about the book »

CNN: What do you think is so scary about Santa? Why do kids react that way?

Watkins: Well, I think you need to look at it from the perspective of a 2-year-old. I think 2- to 4-year-olds are most likely, first of all, to completely freak out over Santa. When they're younger, everyone looks weird and new and different, and you just never know what's going to make a kid cry at that age.

But a 2-year-old knows what a regular person looks like, and Santa ain't it. Santa is huge, and he's got that crazy white suit, and he's got the huge white beard and the hat. And he's sitting on this great big throne. He's very intimidating to a real little kid.

So he can be the nicest, sweetest Santa on the planet, but I can see why a 2-year-old would have a meltdown. Especially, you know, after waiting in line for an hour, and there's kind of already a lot of noise. And then this guy starts yelling, "Ho! Ho! Ho!" at them.

CNN: It said in the book that you never made your kid sit on Santa's lap. Is that true?

Watkins: I never forced him to. We tried every year. We would wait in line, and he was always up for it, always wanted to go see Santa, until we got right up to his turn and then forget about it -- he was not going anywhere near him. And I just thought, well, OK, I wasn't going to force him.

Now looking at these pictures, I think, well maybe if I had just done it one time, it'd be funny to have the picture now. Because these families keep these photos -- they might have some of the nice, smiley pictures too, but I think it's these crying pictures that really become heirlooms. You know, they bring them out, and everybody laughs at them. And as the kids get older they have to suffer through it, but then they kind of grow to appreciate it, too.

CNN: Do you have any like that of you?

Watkins: My mom scrounged around trying to find some, and we did find one, but I was not scared. I was very happy to be seeing Santa at the bank. I don't know if they still do that, but back in the '60s you could go see Santa at the bank. And my brothers and I were just as happy as can be because we knew where the toys were coming from, and we were going to be polite to Santa.

CNN: Have you had any complaints from Santas or Santa associations?

Watkins: Well, for the book, Denise actually interviewed the president of the Amalgamated Order of Real Bearded Santas, and so we got some comments from them.

No complaints from Santas -- at least not yet. We did hear from kind of a grouch on Amazon.com who objected to our laughing at and making money at the expense of crying children. But not yet has anyone come up to us and said, "I am scarred for life because I was afraid of Santa." So I'm pretty sure that most of these kids are over it in about five minutes.

All About Holidays • Books • Santa Claus