(CNN) -- In tests for teacher Tom Farber's high school class, students can demonstrate their mastery of calculus and find out where to get braces or even a haircut. 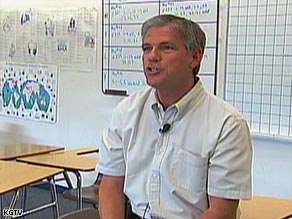 Squeezed by classroom budget cuts, the Rancho Bernardo High School teacher is selling ads on his exams to cover the costs of printing them.

"It raises money for the teachers and it's amusing for the kids, so it seems like a win-win," said Luke Shaw, 18, a student at the suburban San Diego, California, school.

Parents and administrators also praise Farber, 47, for his creative classroom funding, but he doesn't want it to become the norm.

"My intention is, [selling ads] is a stopgap measure," said Farber. "I don't want to be doing this year after year."

Instead, he says, government must do more to help educators provide what students need.

Farber started letting parents and local businesses sponsor tests this fall after learning budget cuts would limit his in-school printing allowance -- tracked by the school's copy machines -- to $316 for the year. The cost of printing quizzes and tests for his 167 students will easily be more than $500, he said.

That meant Farber, whose courses prepare students for the Advanced Placement exam, would have to give fewer or shorter tests, or find money. Farber, who says 90 percent of his students got a 5 -- the top score -- on AP exams last year, said skimping wasn't an option.

"It has to be a certain quality, or they won't be ready," he said.

So Farber, who says he'd never asked for money from parents in his 18 years of high school teaching, pitched the ad idea to parents at a September back-to-school night. For checks made to the math department -- $10 a quiz, $20 a test or $30 for a final exam -- they could insert an inspirational quote -- their own or someone else's -- or a business advertisement at the bottom of the first page.

Watch how teacher came up with ad idea »

Of the seven to run so far -- one per test or quiz -- five were quotes, and two were ads from local businesses connected to the parents or someone close.

"Brace yourself for a great semester! Braces by Henry, Stephen P. Henry D.M.D.," read one of the ads in small type at the bottom of a quiz's first page.

Farber said orders took off after recent media reports. He's collected more than $300, and he believes he'll top $1,000, with some ad buyers paying more than required. All amounts beyond his shortfall will cover colleagues' printing costs, he said.

Farber said students and parents have gotten a kick out of the sponsorships.

Student Scott Robison, 18, said: "I liked it because all the teachers complain about budget cuts, and he did something about it. It hasn't hurt in any way."

And while Jay Shaw praised Farber's idea, "It's just sad it came to the point where he needs to do that," he said.

"What I'm doing now is ... dealing with the economic situation and making sure kids get what they need," Farber said. "Teachers shouldn't have to scrounge for funding. To me, this is what our government is for, to provide necessities, and that's why we pay taxes."

The California Federation of Teachers says the state cut more than $4 billion in education spending this year. Phillips said that when the district sought to chop $11 million from its $265 million annual budget, it wanted to keep teachers but cut other areas. Among the things to go was 30 percent to 40 percent of Poway schools' materials spending -- including copying.

Phillips praised Farber's ad idea as creative. But he said district officials are weighing whether to set guidelines, especially for business ads.

Farber said he'd prefer to keep ads to local "mom-and-pop" operations. He's accepting one from hair salon Fantastic Sam's, noting that although it's part of a chain, the store that's buying the ad is locally owned.

Farber and Phillips said they don't know of any Poway teachers wanting to replicate the ad idea, but they said educators there have long spent out-of-pocket for supplies.

Susan Carmon of the National Education Association said a 2003 study on the issue found U.S. teachers spent an average of $450 of their own money yearly for school resources.

"You can only imagine -- with tighter school budgets in almost every state this year -- that this number can only get higher," said Carmon, the NEA's associate director for teacher quality.

Fred Glass, the California Federation of Teachers' communications director, said things could get worse for teachers in the state, with California considering $2.5 billion in mid-year education cuts.

Glass said he hopes Farber's ad selling "will underscore for disinterested observers that this [funding shortfall] can't go on."

Glass said he wouldn't like to see any classroom ads. "The student needs not to be distracted by anything on the test. This is not instructionally sound," he said.

But he said he doesn't blame Farber.

"This teacher shouldn't be put in this position," Glass said.

To those who don't like his idea, Farber suggests asking legislators to better fund education or writing a check to a school.

But he said most of the feedback has been positive.

"One person said, 'Too bad you're not a bank, because you might qualify for $700 billion,' " he said. "I thought that was pretty clever."