WASHINGTON (CNN) -- Jazz musician Wynton Marsalis knows how important education is for youth, but what feeds their minds and souls, he says, often lies beyond traditional classroom walls. 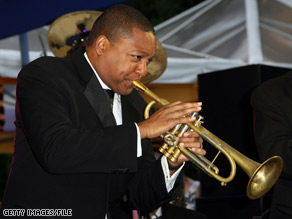 "The most essential thing for the development of kids and their understanding of the world are those things they do that's not school-related -- just any extracurricular activity," the Pulitzer Prize winner said. "When you have activities you learn at a young age, you can do whatever you put your mind to!"

Marsalis, 47, co-founded Jazz at Lincoln Center in New York. As part of its goal to inspire and cultivate jazz audiences, Jazz at Lincoln Center sponsors youth events including an annual nationwide high school jazz band competition and festival, a Band Director's Academy and a popular concert series for kids.

"Jazz helps younger kids, especially, to connect with their innermost feelings and learn that [there's] nothing wrong with being real," Marsalis said.

To Marsalis, jazz performer and instructor Davey Yarborough does just that. Yarborough provides Washington youth the opportunity and guidance to nurture their musical talents, not only as an educator at the Duke Ellington School of the Arts but also at his nonprofit jazz arts institute.

Marsalis met Yarborough in the 1980s during one of his performance trips to the nation's capital and was struck by Yarborough's dedication to the students.

"I will see him at events, concerts. ... He always has kids with him," Marsalis said. "He teaches all of his kids with the same intensity and feeling, and gives them that same feeling of specialness. It's something that can't be contrived."

Yarborough, 55, says his motivation and inspiration stems, in part, from tragedy.

After the 1988 death of one of his Duke Ellington students, Anthony Nash, in a drug trafficking incident, Yarborough decided to create a program geared toward music enrichment and mentorship during off-school hours.

"To have an element of the street take a student that was so bright and so promising was a trigger for me," Yarborough recalled. "I knew all the students [as] family, and I want to know what's going on as much as I can with the students I am working with."

Yarborough established a free summer-school music program at Duke Ellington to provide his students with a "safe space" where they could develop their skills.

But when some school music programs in his district were cut, Yarborough noticed that many other students who had a desire to learn an instrument no longer had an opportunity to play or nurture their talent.

"The realization that I could only cater to the students at Ellington spurred the idea of 'OK, we need to take this into the community,' " Yarborough said.

Designed to serve those students who were "left out" by the school system or "left behind" by competitive Duke Ellington auditions, Yarborough says, the institute provides young local musicians with free jazz instruction, lectures, professional workshops and paid performance opportunities. They also have a mentoring system of professional artists.

"I wanted to really be able to see the students develop," Yarborough said. "Once a young person decides they want to be a musician, such as I did in the third grade, they have a support system that takes them all the way through their career."

Since its inception in 1998, more than 1,000 students have taken free music enrichment classes at the Washington Jazz Arts Institute.

"He loves those students," Marsalis said.

"There's no question that his kids have a much greater appreciation of jazz, but larger than [that], they have an appreciation of other people and of humanity and what we can all do if we invest in each other. They learn [that] from being in his presence."

All About Jazz and Blues • Wynton Marsalis