(OPRAH.com) -- Oprah has always said that mothers have the most difficult job on earth, and actress Jenny McCarthy is one mom who has never backed down from a challenge. 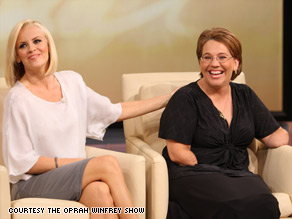 Doctors removed Monica's uterus, ovaries, gallbladder and part of her colon, along with her legs and arms.

Jenny has been an outspoken advocate for parents of children with autism since her son was diagnosed with the disease two and a half years ago.

In her new book, "Mother Warriors," Jenny tells the story of other moms fighting for their special-needs kids.

So when Oprah heard about Monica, another mom fighting for her children, she thought Jenny would be just the person to get this mother warrior's story.

After going through a painful divorce, Monica met Tony when she least expected it. Monica already had a 9-year-old daughter, but soon after she and Tony got engaged, they were thrilled to be expecting another bundle of joy.

In August 2007, she had a C-section, and though she worried about complications, Monica delivered a healthy baby girl. But hours after Sofia was born, Monica began running a fever. No one was concerned at first -- Monica figured it was just hormones -- but three days later the fever hadn't broken, and Monica's abdomen was swollen and painful.
iReport.com: What do you think about this story? Sound off on video

The doctors at Monica's hospital thought she might be infected with a deadly strain of bacteria. They flew her to a hospital in Boston where she was diagnosed with necrotizing fasciitis, also known as flesh-eating bacteria.

Defying the odds, Monica survived, but many of her organs didn't. The doctors removed Monica's uterus, ovaries, gallbladder and part of her colon that same day.

Within four weeks, Monica's infection had restricted the blood flow to her arms and legs. Her nurses cleaned her limbs every day, and she knew they were trying to keep her from seeing the damage. But Monica wanted to face the disease head on. "I needed to know what I was up against. I didn't want to be shielded anymore," Monica says.

Eventually, doctors told Monica they had to amputate both arms and both legs. The surgery sounded scary, but Monica was determined to put it behind her and get back to her daughters.

"I was frightened at first, but when they told me [my arms and legs] had to be amputated, it was: 'Do it. I've got to go home,'" Monica says. "[I thought,] 'I have a life to live and it's not here, and until you amputate, I can't move forward.'"

After her amputation, Monica spent two months in the hospital, where she underwent a total of 37 surgeries. As Monica grew stronger, Tony realized there was no reason to postpone their wedding any longer -- they got married in the hospital chapel in October, 2007.

Monica spent the next two months going through grueling rehabilitation.

"She's a fighter," Tony says. "If they told her two hours of physical therapy a day, she'd ask to double it up to four. She wanted to come home as soon as possible. They didn't think she'd ever walk again, but she made it happen."

Right before Christmas, Monica got what she'd been waiting for. She was given the okay to go home to her husband and two daughters.

A year later, Jenny visited Monica and her family at their home outside Boston, Massachusetts. "I had a big aha! moment after spending six hours with her. Monica accepted what is. She looked down and said: 'Okay, this is the situation. I can't change this, so I might as well surrender to it,'" Jenny says. "When she does that, she is able to move forward in peace." Oprah.com: Jenny McCarthy answers parenting questions

Nurses and doctors say they expected a "why me?" breakdown from Monica while she was in the hospital, but it never happened.

"I did have moments of 'If God just left me one arm or one leg, life would be a little bit easier,' but that's not the way it went," Monica says. "You make do with what you have. I could still love my girls. The bottom line was I am still here."

Monica's not the only warrior in this family. Jenny calls Tony a daddy warrior because he always stood by Monica and their family. "I actually considered not marrying him because I wasn't the person he agreed to marry," Monica says. "But then I realized he loves me. He's here, and he's my heart. I'm still a woman, and I still have a heart and a mind, regardless of whether I have arms or legs."

Tony says that there was never even a moment when he considered leaving Monica.

"She was the same person inside, so nothing had changed," he says. "At one point, they went to bring in a preacher to give her last rights, and I turned him away and said: 'No, she's got a lot to fight for. She's not going anywhere, she'll be here for our family.' And she was. She is."

Monica's family has been there for her too. When 9-year-old Madalyn found out about the surgeries, she took the news well.

"She'd been watching 'Dancing with the Stars,' and Heather Mills was on," Monica says. "I told her, 'Well, I won't be doing back flips.' But she was excited and said, 'You can be bionic mom.'"

At Monica's house, she and Jenny had a mom-to-mom chat about the issues that mother warriors face. "Within the autism community, one of the things that we, as mothers, miss so much is being able to caress our children, because they don't want to be touched," Jenny says. "Do you experience that?"

Monica says she has similar moments of sadness. "For a while, I really couldn't lift Sofia up," she says. "I could hug Madalyn and have her hug me back, so that was good, but I miss being able to braid her hair, paint her fingernails, toenails -- the things that moms and daughters do."

All mothers face frustrations, but Monica's come with tasks that used to be simple. "I get frustrated about not being to do everything that I used to do," she says. "Everything is different -- things as simple as picking up a pen or signing a paper for Madalyn at school."

Monica hasn't let any of these obstacles stop her from living her life to the fullest. She does everything a mom would do, including paying the bills, which can take her up to three hours. "It's the ultimate practice in patience," Jenny says. Oprah.com: Meet more inspirational moms!

"What good are you to your children if you're miserable? What are you teaching them? That you give up? That's not what I want to teach my kids," Monica says. "I want my girls to know that their mother's a fighter."

Monica's been adjusting to her new life for a little over a year, and she says her strength comes from her support system -- from family and friends to people at the hospital and rehab facility. There are more surgeries to come, she says, but she's taking it one day at a time.

"I've come to the realization that things are as they are, and you have to move forward. Life goes on," she says. "There's no sense dwelling on it -- that just hurts too much and you don't live your life the way you want to. And with a wonderful husband and two great girls, life is fun."