Old enough to vote, serve in the military ... and drink? 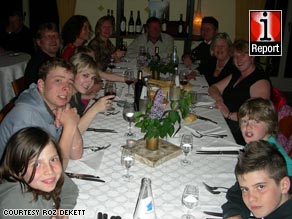 Roz DeKett let her 18-year-old daughter, seen here on the left holding a glass, drink wine when they traveled to Italy.

The 20-year-old says he is bombarded by images of college students partying with kegs and cases of beer.

That's why he supports the drinking age limit of 21.

Bui thinks students would simply start binge drinking at 18 if the age were lowered -- and the problem would be exponentially greater because peer pressure in high school is even stronger than in college.

The debate over the legal drinking age usually comes down to this: If you're old enough to serve on a jury, die for your country and decide who should be president, are you old enough to drink?

Supporters and naysayers alike ignited the debate again after CNN.com published a story this week about 100 college presidents who are urging lawmakers to consider lowering the drinking age.

"Twenty-one is not working," the group's Web site states. "A culture of dangerous, clandestine 'binge-drinking' -- often conducted off-campus -- has developed."

Critics, including Mothers Against Drunk Driving, are calling into question the presidents' motives, telling The Associated Press that lowering the legal age would cause more drunken-driving deaths.

So would lowering the drinking age fix anything, or just compound the problem? CNN.com asked a mix of iReporters and college students across the country to weigh in on this debate.

Many underage students on his campus drink, Bui said. But he has noticed a sort of understanding between police and those drinkers under 21. The police often leave you alone, he said, as long as you aren't causing trouble.

Alissa Griffith, an Ohio University senior, said perhaps that is why the drinking age should be lowered to 18 or 19 -- it would simply be easier on everyone. When only half of the college population can drink, a lot of valuable resources are wasted trying to enforce the law, she said.

"It would lessen the stress on local bars. There would be judiciaries who could be dealing with real crimes. It would be easier on the administration."

Melody Munroe, a 26-year-old military wife from Norfolk, Virginia, disagrees with the argument of "old enough to serve, old enough to drink."

"I used to think the same way until I became a Navy wife and saw the people I was saying should be allowed to drink," Munroe said.

She and her submariner husband watch the military base's liquor store parking lot fill up Thursday through Sunday.

Munroe says that the younger servicemen who come in to work with hang overs not only endanger themselves but everyone they work with. In her opinion, the drinking age should be raised to at least 25.

"You volunteered to give your life. I'm not volunteering to die at your hands because you're trashed and driving drunk," she said.

As a paramedic, Austin Freeman has seen more drunken-driving accidents than he can remember. But he says the ages of those drunken drivers span anywhere from 18 years old to 80.

"That makes them irresponsible," he said. "Age has nothing to do with it."

Freeman got married at 18, an age many told him was too young. But his dad raised him up to believe that he was whatever age he acted. He applies the same rules to his stepson and drinking. "We have to teach our young ones that this is a responsibility that you have. Treat it with respect."

Many Europeans say they grew up respecting alcohol because it wasn't a taboo subject.

West Virginia University senior David Ryan is the opinion editor for his school's newspaper, The Daily Athenaeum. Ryan grew up in Australia and said drinking was merely part of socializing in his home country. "Here drinking seems to be the main theme of the party," he said.

Roz DeKett, a 48-year-old mother from California, grew up in England and remembers a very laid-back attitude.

"If it's in the open, much of the allure is gone," said DeKett, who was drinking wine at dinner by 13. "I never thought it was cool to drink. It was never an exciting or daring thing to do."