iReporters: Turning 50 isn't what it used to be 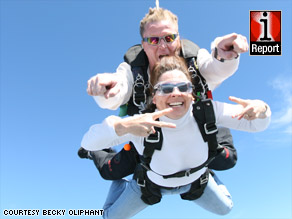 The singer is showing no signs of slowing down as she reaches 50. She will soon begin a world tour and is still regarded as a beauty and fashion icon by many.

In honor of Madonna's big day, we asked iReporters to share their stories about turning 50 and what the milestone means to them.

Dr. Becky Oliphant jokes with her marketing students at Stetson University in DeLand, Florida, that she and Madonna are just months apart in age. Oliphant turned 50 in May.

Oliphant went skydiving with her graduate class weeks before her birthday. The jump was a first for her, one of many exciting things Oliphant hopes to experience now that she's 50.

"It's a very liberating feeling," she said. "I'm doing things I've never done before; I'm trying more things. Maybe it's because I feel like I don't have that much time left to do everything that I want to."

Oliphant says she works hard to maintain a healthy diet and walks often. She said it's necessary to stay in shape to keep up with her sons, ages 12 and 14. "I have to stay young to keep up with them."

See photos of iReporters who have reached the 50-year mark »

Now 51, Tackett says he's "doing more now than I ever thought I could."

After losing 140 pounds in 2004, Tackett has embraced a healthy and active lifestyle. He bikes three times a week to work and runs and swims on a regular basis.

He ran the Boston Marathon in 3 hours and 45 minutes in April. Three weeks later, he clocked in at 6½ hours during a half-Iron Man competition in Panama City Beach, Florida.

Watch Tackett describe how he prepared for races »

"As I got older, my eyes opened up," Tackett said. Learning that the human life span is increasing made him realize the importance of staying healthy.

In 2006, life expectancy at birth in the United States hit a record high of 78.1 years, according to the Centers for Disease Control and Prevention.

Life expectancy for white males is 76 years, and white women have a life expectancy of 81 years. The numbers are slightly lower for black men and women, at 70 and 76.9 years, respectively.

"If I'm going to live that long, I want to be in the best shape I possibly can be," Tackett said.

At 50, Deborah Elston says she's in the best shape of her life.

The Chicago, Illinois, resident does yoga and walks at least 15 miles a week. She and her partner regularly walk 13.1-mile half marathons, and Elston recently completed 26-mile marathon walk with the Leukemia and Lymphoma Society.

Although she was not athletic in her younger years, Elston works hard to stay active. Her brother died of a heart attack in February 2004 at the age of 39, a tragedy that strengthened her desire to be healthy.

"If that isn't a wakeup call to live each day as if it were your last, nothing is," she wrote on iReport.com.

Although Elston said the thought of turning 50 initially scared her, she continues to feel "young at heart." iReport.com: See why Elston thinks "50 is the new 30"

"I feel great and plan on fighting the aging process every step of the way," she said.

Like many iReporters, Carol Herm is embracing 50 with open arms. The mother of three celebrated her 50th in December and said that, since then, "life has taken off."

"I feel like I am the best 'me' I have ever been," she wrote on iReport.com. "I am confident and so sure of myself, something that I never enjoyed in my younger years."

Herm, who lives in Newtown Square, Pennsylvania, said she and her husband love being 50. With three grown children, they spend more time together and less time worrying about the cost of braces, tuition and other expenses.

"This is an awesome age," Herm said. "My husband and I are enjoying every minute."

Elonda Abrams of Beaverton, Oregon, agrees. "Turning 50 has given me a new awakening and zest for life," she said.

Abrams explained that a vigorous lifestyle is achieved physically and mentally. She exercises often, has a healthy diet, surrounds herself with positive friends and regularly attends church.

Abrams believes that Madonna is just one example of "the 50, fit and foxy club."

"I want to be an example to women all over that age really doesn't matter."