Your parents named you what? The pros, cons of unusual names

(CNN) -- When you hear the name "Indiana Jones," you think of an archaeologist carrying an idol and dodging a giant boulder. When you hear about "Dow Jones," you might wonder if it's up or down that day. However, in this case, Indiana and Dow Jones are siblings, 12 and 7 years old, respectively. 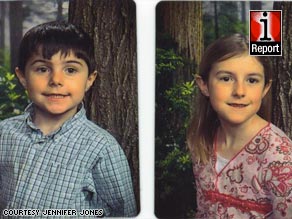 Indiana Elizabeth Jones shared her story with the iReport community, and we spoke with her mother, Jennifer Jones. The Port Deposit, Maryland, resident says Indiana got her name simply because her husband's family is from that state.

As for Dow Joseph Jones, there was serious talk of naming him Jack Ryan Jones, to keep the Harrison Ford theme. (Jack Ryan is the character Ford played in a series of action movies.) Instead, her husband named their son Dow on a dare while Jennifer was asleep in the hospital bed after giving birth.

She said she cried when she found out and even thought about having Dow's name changed.

CNN.com asked users to share their unusual names after a 9-year-old New Zealand girl named Talula Does the Hula from Hawaii won the right to change her name. (Full story)

Dozens of members of iReport.com community explained the stories behind their odd names, as well as what they've experienced in their day-to-day lives.

Some names might not seem problematic until they're actually used on a daily basis. Open Weaver Banks of Ho-Ho-Kus, New Jersey (speaking of odd names), says that she shared her story with iReport.com in hopes that parents would think twice before giving their children an unusual name.

Open is an unusual name, but it's not necessarily a name that one might expect to cause regular difficulties. Weaver Banks, however, says that she often has problems with it. iReport.com: Check out Banks' story

"I have a hard time using my credit cards for personal items, because clerks will accuse me of using a business card. I cannot tell my name to someone without having to explain it. Some days, it is exhausting, and I can't even disguise the annoyance in my voice."

Banks' childhood was "painful" because of her name, too. "I still give my mother a hard time about the name choice, and she tries to explain that she was young, she liked how it sounded, it was 1970 and various other reasons," she explains. "I actually tried going by another name for a year, and I realized that as much as I truly hate my name, it is embedded in me and so much a part of my experience." iReport.com: Read about more unusual names

Some people avoid the use of their name altogether to avoid questions, confusion or embarrassment. "At times, for the sake of avoiding an uncomfortable conversation or throwing someone off guard, I answer to the names of 'Mary' or 'Kelly'," says Bluzette Martin of West Allis, Wisconsin. At restaurants, "the thought of putting an employee through the pain of guessing how to spell and pronounce 'Bluzette' just isn't worth it to me."

Martin was named after "Bluzette," an up-tempo jazz waltz written by Jean "Toots" Thielemans. Despite her daily problems with this name, it certainly has its perks, like when she met Thielemans in 1987 at a club in Los Angeles. "When I met [him], he thanked my mother," she says.

She called her mother in the middle of the night and told her that she had a surprise for her. She gave the phone to Thielemans, and he started doing his famous whistling, to the tune of "Bluzette." iReport.com: Check out Martin's story

Even celebrities aren't immune to the use of unusual names. Take boxer George Foreman's children, all named George. (Or actor Jason Lee's son, Pilot Inspektor, or comedian Penn Jillette's daughter, Moxie CrimeFighter.) These are just-plain bizarre names, like that of iReporter Holden Holden.

Holden, a sophomore at Shippensburg University in Pennsylvania, says that having a double name has its pros and cons. He says he has a face people will remember because his name is easy to remember. Unfortunately, he says, he's not very good about remembering names himself, so it can lead to some awkward moments.

Holden's grandfather died a month before he was born but was always called by his last name as a nickname. "My last name is my mother's maiden name, which she reverted to after she divorced," he explains.

Holden also says that he plans to run for president in 2036. "Since my name is pretty easy to remember, it'll be easier to garner votes that way." iReport.com: Check out Holden's story

As for Dow Jones' mother, she didn't go through with changing his name. Now she sees it as something unique for someone with the very common last name "Jones." And perhaps that's the bright side to having an unusual name: It sets you apart from the crowd.

"There is a new Indiana Jones movie out this year, so all my friends think it's pretty cool," she says. iReport.com: Keep up with the Joneses, check out their story