'A mountain bike changed my life'

HIGH BRIDGE, New Jersey (CNN) -- "The thought that I can reach out and permanently improve someone's life for the better is addictive," says Dave Schweidenback. 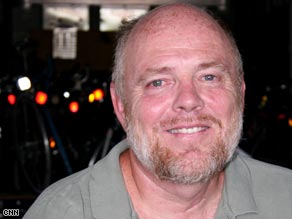 Dave Schweidenback saw transformative effects of bikes while in the Peace Corps in Ecuador from 1977-80.

Several times a year, the 55-year-old can be found prepping large shipments of used bicycles bound for a developing country. For Schweidenback, gathering and breaking down these bikes is a labor of love -- one that is helping to keep the bikes out of landfills and give them new life.

"Used bicycles can transform the economic and social condition of families," says Schweidenback. "[They] give people access to jobs, health care and education that is too distant for walking."

Since 1991, Schweidenback's nonprofit Pedals for Progress has collected and shipped more than 115,000 used bicycles to 32 developing countries worldwide, where they are sold at a low cost to local residents like Don Roberto Garcia.

"A used woman's mountain bicycle changed my life," says Garcia, 54, a house cleaning supplies salesman in Nicaragua who works six days a week to support his six children and buy medicine for his wife, who suffers from cancer.

For 20 years, Garcia walked six to seven hours a day, hauling his merchandise in a wheelbarrow along a 6 mile route. This earned him $2-$3 a day.

"More than anything, I would always return home so tired from the walk," Garcia recalls.

Little by little, Garcia saved his money and was able to buy a used bicycle six years ago from a Pedals for Progress partner agency in Jinotepe, Nicaragua.

"Because of a bicycle, I now earn about $4 a day," says Garcia. "I sell more and I do my rounds quicker. I tell everyone to go buy a bicycle."

The seeds for Schweidenback's Pedals for Progress were planted years ago while he was volunteering for the Peace Corps from 1977-80 in Ecuador, near the Amazon Basin.

"Besides the bus that comes through town and one guy that owned a pickup truck, everybody walked everywhere all the time," he recalls.

"My landlord was the exception because he owned the only bike in a 500-mile radius. He was the most successful man in the region because he could access a job and get wherever he needed to go."

"I remembered how [the need] in developing countries was so great, that I couldn't stop thinking about it," he says.

Knowing the bikes could be put to better use, Schweidenback asked members of his community to donate 12 used bicycles; he planned to send them to Ecuador. The community brought him 140. Within a year, Schweidenback had created Pedals for Progress and shipped roughly 500 bicycles to developing countries.

Today, Schweidenback organizes 140 used bike drives each year and, on average, collects 90 bicycles in three hours. Donors are asked to pay a $10 fee per bike to help cover shipping costs and reduce the cost of the bicycle when it's sold overseas. Each bike is sold for about $15.

"There's a bike that's unloved in every garage in this country. Rather than put these old bikes in landfills for no reason, we can use them as economic stimulus to aid our neighbors," Schweidenback says.

"This is the transfer of wealth between nations because these have great value overseas. And they give people the ability to hold a job or a child the ability to go to school."

Watch Schweidenback talk about his inspiration for Pedals for Progress »

Pedals for Progress bicycles have been sent to countries in Central America, Africa, Eastern Europe and the Caribbean. For Schweidenback, knowing he's making an impact keeps him going.

"You can change someone's life with your bike."