Buy a house, get a car

Easton, Maryland (CNN) -- New appliances and vacation packages aren't unusual giveaways in the housing slump, but one woman is taking the unorthodox step of throwing in a car with the purchase of her home. 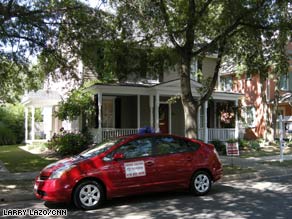 Catherine Poe is throwing in a Toyota Prius hybrid with the sale of her renovated Maryland house.

"My daughter came up with the idea," Catherine Poe said. "We're losing money on the house, and the Prius only adds to losing money, but we also realize it's time we really got to sell the house."

Poe and her daughter bought the 1907 three-bedroom colonial in Easton, Maryland, in 2005 as an investment property.

In the past, the pair has bought two historic homes within minutes of Maryland's shoreline, renovated and resold them during a red-hot housing market.

But after more than a year of trying to sell it, taking it off the market and putting it back on, they say they're ready to cut their losses.

With gas prices hovering about $4 a gallon in most states, they hope the fuel-efficient Toyota Prius hybrid, which costs about $23,000 for a new model, will sweeten the pot even more.

Poe's real estate agent said he is optimistic about the giveaway, saying that an incentive of that magnitude was a first for one of his clients.

"You have to be creative. You have to learn how to do different things, and if we learn anything from this, certainly, we will replicate it," said Chuck Mangold, who has put an ad for the Prius in the local newspaper.

But Elizabeth Blakeslee of the National Association of Realtors cautions buyers about "gimmicks" to draw attention to a house.

"In my 18 years as a Realtor, I have never known anyone who has actually received whatever it was, the trip or the car," said Blakeslee, a regional vice president for the NAR. "It's generally negotiated away during the process of the buying or selling negotiations."

She added that a competitive selling price is a better way to get buyers interested and generate a sale.

According to the NAR, existing home sales remain 14 percent below a year ago. Even with a projected small uptick in 2009, analysts are predicting a slow recovery.

Poe said she is motivated by a love for old homes.

"It's not flipping, so much as coming back and renovating and presenting it to the person who appreciates that," she said. "It's not like coming and going 'Wham, bam, here's a house for you,' just jack up the price $100,000.

"The love affair with historic houses is still there. We're having to be realistic also."

The house is selling for $595,000, and Poe says she is willing to reduce the price if a potential buyer doesn't want the Prius.

She just hopes the car gets them through the door, because a straight price cut apparently just doesn't cut it anymore.

All About Real Estate Sales