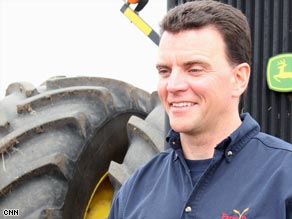 The Ellendale, North Dakota, farmer had gotten caught in the power takeoff shaft of his farming equipment, and his injuries left him unable to plant his 2,500 acres of soybeans and corn. The accident might have meant the end of his family's farm.

Enter Bill Gross and Farm Rescue. Since 2006, the successful UPS pilot has been, in his "spare" time, providing a helping hand and a hearty dose of hope for American family farmers like Olson.

Through his nonprofit, Gross, 41, and volunteers assist farmers who have suffered a major illness, injury or natural disaster. Today, any of those crises can put an end to a farmer's livelihood.

According to the U.S. Department of Agriculture, the number of farms in America has decreased by 67 percent since 1910. Raised on a family farm in North Dakota, Gross says farms have changed since his childhood.

"Years ago, when there was an accident or an injury, neighbors would usually come and help each other," recalls Gross. "Nowadays, there are fewer family farms and fewer children on those farms, and it's just not as easy for neighbors to help one another anymore."

Farm Rescue's goal is to keep farmers afloat by helping with the farm labor through the planting and harvesting seasons.

"We don't give out money to farmers, this is not a handout or a bailout for any farm family," says Gross. "It's just to help them through the year so they can continue."

Olson says he doesn't know what he would have done without Farm Rescue's help.

"I told my wife at the time we probably would have had to rent the land or something. No doubt we would have not been able to do it ourselves," said Olson.

Olson had sent an application to Farm Rescue and heard from Gross in less than two weeks. Olson's request was granted, and today he is waiting to harvest the 2,500 acres of soybeans and corn.

Since 2006, Farm Rescue has helped 59 farmers like Olson keep their land. And Gross plans to help many more.

"By the end of the year, I feel fairly confident that the total family farms assisted since we started will be 63," says Gross. "And our goal for 2009 is to reach a total of 100 farm families."

Olson says that Farm Rescue's work supports the spirit of the American farmer.

"One day I'm up flying a Boeing 747 and the next day I'm down here working in the land helping these family farmers in rural America," says Gross. "It's quite a difference but it brings me a lot of joy to see these families that need the help.

"Most of our cases are success stories where we help the family out and the next year they're able to do it on their own."