Experts tell how to deal with mortgage crisis

LOS ANGELES, California (CNN) -- With foreclosures and bankruptcy affecting millions of homeowners, CNN's Larry King on Tuesday talked to several experts in the real estate industry to get advice on handling the mortgage meltdown. 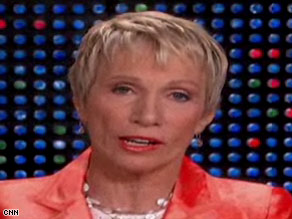 Barbara Corcoran says homeowners have ways of getting mortgage companies to pay attention to them.

Larry King: Is this a good time to sell a house?

Barbara Corcoran: Of course it's not a good time to sell a house. The question is, if you must sell a house, how do you unload it, considering the enormous competition that's out there?

Watch the panelists respond to questions »

King: Suppose you have to sell.

Corcoran: There's one way you can always sell a house in any old market. You can intentionally under-price it. If you go out to your own marketplace and intentionally under-price your home 20 percent to 25 percent less than you think it's worth, or that a credible appraiser tells you it's worth, you will sell that house within the week. There's no such a thing as an unsellable house. It's always a question of numbers.

Michael Corbett: The biggest mistake right now is when you get that default notice, you ignore it. People think that if they just ignore it, it will buy them more time. It's absolutely the opposite. The first thing they should do when they get those notices is contact either the lender or go to HUD [the U.S. Department of Housing and Urban Development]. Get a certified counselor. There's free counseling out there for people, because if you just go ahead and ignore these notices, they automatically trigger legal action. And that moves it faster. If you want to buy some time, call the lender, call a counselor.

Caller: I have a loan with Countrywide, and they will not refinance our interest-only loan, because they say our debt-to-income ratio is too high, and their workout department won't even look at us because we've never been behind on our mortgage and we're not currently behind. It's going to reset in August. What can we do?

Corbett: Unfortunately, a lot of the mortgage companies and the banks don't want to talk to you. It's very sad, until you're actually in arrears. Their loss mitigation or their workout department, they don't want to help you until you're two months or three months in debt.

King: Barbara has a solution.

Jorge Perez: I would definitely negotiate with the mortgage company. Lenders are having tremendous problems right now. They have a huge amount of REOs, real estate-owned properties, and they do not want your house or condominium.

I think one of the biggest problems, nevertheless, is that a lot of people borrowed on variable rate interests when they had mortgages at 1 and 2 percent that grew up over time. And their jobs have not gotten better, and now they're paying much higher interest rates than when they got their mortgages. And this is a big, big problem in real estate today

King: We have an e-mail question from Debbie in Orlando, Florida: "What's a family to do if they lose their home to foreclosure? How can they find a suitable place to live? Aren't they going to be rejected as renters on grounds of poor credit?"

King: Even if you've been foreclosed?

Robert Kiyosaki: Back in the '80s, I got my butt kicked in the market. That's when interest rates were about 18 percent to 20 percent and I was trying to make deals at 18 percent to 20 percent. And it really taught me a good lesson that I had to get smarter. So when I got pounded in the late '70s and early '80s, I at that point said I better get smarter, and today, I have made millions of dollars because of a bad experience.

But if you're not -- if you don't learn from the experience and you think the government is going to bail you out, then you've wasted a big opportunity to learn something.

All About Interest Rates • Real Estate