'The best job I have ever had in my life'

KAOLACK, Senegal (CNN) -- After the sudden death of her 26-year-old daughter left five grandchildren in her care, Viola Vaughn searched for peace. 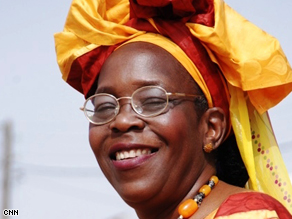 More than 1,500 girls are involved in Viola Vaughn's program in six locations; about 1,000 are waiting to join.

Though she was a native of Detroit, Michigan, Vaughn had worked in Africa for most of her life and considered it home. So she and her husband returned there to raise their new brood and "watch the coconut trees grow."

"But the universe had other things in mind for me," says Vaughn.

She couldn't have imagined those plans would include both further tragedy and the motivation to provide educational opportunities to hundreds of failing schoolchildren.

Soon after their move to rural Kaolack, Senegal, in 2000, Vaughn's husband -- jazz musician Sam Sanders -- died of black lung. Amid her grief, she found comfort in her grandchildren, ages 4 to 12, and filled her days home-schooling them. Her success soon garnered attention from the locals.

"There was a little girl that my granddaughter played with. This little girl kept coming around and wanting to be taught with my grandchildren," recalls Vaughn.

"I went to see this child's mother, and her mother said she had already failed school once, that she couldn't pass because she wasn't smart enough. Well she was smart enough to come find me. And I said, 'OK, I'll help you.' "

Within two weeks, Vaughn had 20 girls in her house who were failing school and asking her to teach them.

Vaughn learned that the regional pass rate for girls was low because it was rooted in the economic need of young girls to work at home. They begin missing classes, then failing exams, often ultimately failing or dropping out of school.

Watch Vaughn tell the story of how one little girl sparked 10,000 »

So in 2001, Vaughn turned her grandchildren's bedrooms into classrooms and began supplementing girls' education.

"I found every one a girl younger than she and said, 'You're responsible to make sure she learns.' I taught them how to teach each other."

It worked. In two years, the group of girls had grown to 80 -- and they were succeeding in school. With a grant, Vaughn was able to hire teachers, and the program continued to expand despite her attempt to set a limit of 100 girls.

To keep their "10,000 Girls" education program going, the girls asked Vaughn to teach them to bake. They began selling cookies and juice and were able to buy books and supplies.

Soon after, they got their older sisters, aunts and cousins -- who had already failed out of the school system -- involved in baking and selling goods. The entrepreneurial element of the program was born.

"They were supporting their cause," says Vaughn. "It was something remarkable."

Today, in addition to a pastry shop and catering business, "10,000 Girls" runs a sewing workshop and the girls export their handmade dolls and household linens overseas.

Half of the funds from these projects go back to the girls; the remainder supports the education program, no longer in Vaughn's house.

More than 1,500 girls are involved in Vaughn's program in six locations; about 1,000 are waiting to join.

"We have girls who were told they'd never get through high school who are at university now," beams Vaughn. "We hope that if we get 10,000 girls out there, 1,000 girls will come back to Kaolack and work. It would revolutionize the whole region.

"Here I am, retired, and this is the best job I have ever had in my life."