• Study: More salt in the diet translated into more soft drinks consumed
• Salt can cause high blood pressure, even in kids
• Almost 80 percent of salt in a person's diet is hidden within the food we eat 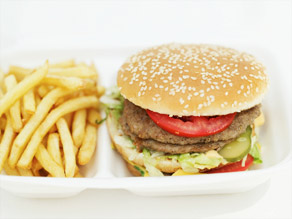 A fast-food hamburger contains about 750 to 800 milligrams of sodium -- half of a young child's daily limit.

Children who eat less salt consume fewer sugar-sweetened soft drinks and may significantly lower their risks for obesity, elevated blood pressure and later-in-life heart attack and stroke, according to a study in Hypertension: Journal of the American Heart Association from February 2008.

How can you reduce the amount of salt in your kids' diet?

Dr. Sanjay Gupta, CNN chief medical correspondent: It's really important to reduce the amount of sodium because it does make a difference. These researchers said that cutting kid's salt intake by half -- that's about three grams -- has the effect of reducing soda intake by two soft drinks per week.

Let me give you some examples of how to do that: Staying away from fast food such as pizza, hamburgers and hot dogs is a good idea because these foods are high in sodium. A fast-food hamburger contains about 750 to 800 milligrams of sodium, or about half of what a young child should get on a daily basis, and that's just one sandwich. Keep them in moderation and certainly don't sprinkle any more salt on them. There are also lots of low-sodium alternatives to products that tend to contain a lot of salt -- soup and cheese, for example. Fresh fruits and vegetables are always a good way of getting nutrition without salt.

What's the deal with salt?

Gupta: Study author Dr. Graham MacGregor said that salt isn't really used as a preservative any more, and the amount of salt contained in processed foods is much higher than we need in our diets.

Is soda bad for you?

Gupta: Soda is associated with a number of health issues. For each additional drink per day, a child is 1.6 times more likely to develop obesity later in life. Studies have also suggested a link between soda and osteoporosis.

MacGregor: Salt is playing a hidden role in the obesity epidemic by causing more intake of sugary soft drinks. Children get habituated to a salty taste. Much of the obesity epidemic is in the hands of the food industry. The most important thing possible is to cook fresh food as much as possible -- those meals will have very little salt at all. Virtually no products use salt as a preservative anymore. Choose bread with less salt, choose cereals with less added salt. Try to avoid these very salty ready-made foods.