• Sen. Edward Kennedy, 76, had brain surgery in June 2008
• Median survival rate for patients with an aggressive glioma is 15 months
• Two years after diagnosis, about 8 percent of patients are still alive 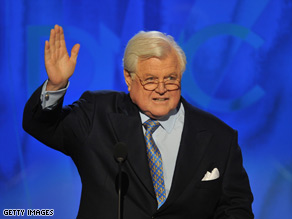 Sen. Edward Kennedy announced in 2008 that he had a brain tumor in his left parietal lobe.

Sen. Edward Kennedy announced in May 2008 that he was suffering from a brain tumor, a malignant glioma, in his left parietal lobe. He had surgery at Duke University in June 2008.

Is surgery the usual course of treatment to take?

Dr. Sanjay Gupta, CNN chief medical correspondent: Yes, surgery to remove the tumor is common, provided surgeons are able to remove a large part of the tumor and as long as they can avoid causing unacceptable neurologic injury. The goal with surgery to remove a brain tumor is to get as much of the tumor as possible without damaging the key areas of the brain that control speech and motor skills. This was something Kennedy's doctors would have determined prior to surgery by taking MRIs to see how close his tumor is to these key areas. Many people will choose not to operate in fear of losing ability to speak, walk, etc.

If the tumor is causing pressure on his brain, they could be doing surgery to remove the tumor. This will reduce some of the side effects he may be experiencing, such as headache, nausea, vomiting or blurred vision. The senator was awake during his surgery. Oftentimes it is that feedback that the patient himself gives that is so crucial: "squeeze your right hand, Senator; move your right arm," that sort of thing. "Can you say the following word..." That sort of stuff is very crucial.

How common is brain cancer?

Gupta: 1.3 percent of all cancers are brain cancers. Twenty thousand cases will be diagnosed in 2008, according to the American Cancer Society and the National Cancer Institute. Fourteen percent will occur in the parietal lobe, which is where Kennedy's tumor is located. The majority of cases occur in patients over the age of 55.

How common is it to follow surgery with chemotherapy and radiation?

Gupta: Neurosurgeons agree that malignant gliomas are very resilient to treatment. Sometimes, surgery alone is not enough to cure the cancer, because cells from the tumor get too far into the normal surrounding brain tissue. In this instance, surgery combined with radiation therapy and or chemotherapy is often used.

There is very well-established evidence that radiation therapy doubles survival in patients with glioblastoma. If he starts radiation following the surgery, it would typically be five days a week for 30 days.

Background
On CNN.com: What Kennedy's diagnosis could mean