How monks find their happy groove 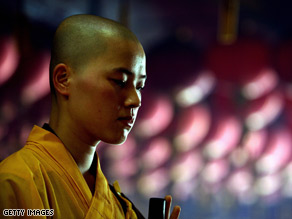 Monks have an ability to generate a feeling of bliss and happiness when they enter a deep state of meditation.

Tell us about one of the subjects of this study.

Dr. Sanjay Gupta, CNN chief medical correspondent: Barry Kerzin was on the fast track as a physician at the University of Washington, and he gave it all up, moved to Tibet and became a monk. He and some Buddhist monks like him have a unique ability that is proving very helpful to neuroscientists trying to understand how the brain feels happiness.

Kerzin didn't reject modern medicine. He says the Dalai Lama has encouraged him to keep up his medical training, and he does. He's still a doctor. But since becoming a monk, he's without a car, a television, a microwave oven -- and yet he says his lifestyle leads to inner joy and that the other things don't seem so important.

What did the study show?

Gupta: Inside this MRI scanner, Kerzin meditates with such focused attention that he can generate his own bliss. His good feelings show up in an area of the brain where researchers think happiness lives, the left prefrontal cortex. Negative emotions such as fear and anxiety show up on the other side of the brain.

What do the monks think about when they're manipulating their thoughts?

Gupta: They focus very intensely on one thing. It could be anything, but in most of this research, the monks focus on generating compassion. It works very much like an on/off switch. The transition in the brain is very pronounced. Any of us can try to elicit happiness like this. But the feelings we typically generate disappear in less than half a second. Kerzin meditates up to 12 hours a day. Somehow he and others well-practiced at meditation can manipulate the feelings to last for minutes and minutes and minutes, sustained over time.

What if you're not a Buddhist and don't meditate?

Gupta: The effects aren't specific to meditation and Buddhism. There are similar studies, with similar results, testing Christian nuns who pray intensely.

Religious involvement appears to reduce anxiety, depression and substance abuse, and increase longevity. In fact, some studies tell us that two-thirds of all Americans use prayer to try and help healing. Also, studies show religious people are happier than non-religious people. In one study, 43 percent of people who attended a religious service weekly said they were "very happy," but 26 percent of people who seldom or never went to a service said they felt that way. And that pattern is consistent among all major religions.

Gilbert: It's no surprise that happiness and health go to together. But what does surprise people is it's not just the case that health causes happiness. Of course, it does. When you're free of distress, you're free of pain and you're able to engage in your life and have social relationships. You're a happier person.

What's surprising is that happiness can cause health. It shouldn't really surprise us, should it, because the stress hormones that we - that our bodies produce when we're feeling unhappy are poison for both our bodies and our brains.

Gupta: Say, for example, if you're stressed at work or just not feeling like yourself, is there a strategy that people can use to sort of become happy or get happy?

Gilbert: Well, there's not shortage of strategies. And most of us know what they are. We know which kinds of things make us happy. Tickling the children, eating a piece of chocolate. We know which kinds of things don't. The big mistake is thinking that we ought to be happy all the time. Understand what the brain has emotions for. Emotions are to tell you whether you're doing the right or the wrong thing for yourself. There are times when you're supposed to be feeling bad. You're not doing something wrong if you're not happy all the time.