10 years of Viagra: What the blue pill couldn't cure

(CNN) -- Before middle-aged men started singing "Viva Viagra" in TV ads, before former Sen. Bob Dole appeared in its commercials in the '90s, before the blue pill with a funny name entered the public lexicon, impotence was hush-hush. 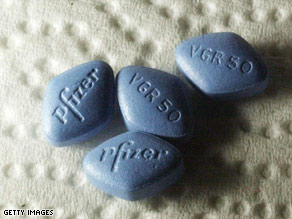 Viagra entered the market 10 years ago, bringing once taboo subjects like erectile dysfunction out in the open.

Now there's no getting away from it.

In-boxes are clogged daily with spam mail promising cheap and instant manliness delivered fast and in bulk. Couples exchange amorous, come-hither looks followed by a lengthy recitation of side effects on TV ads. The pill helped more than 25 million men get their groove back and blasted the topic of erectile dysfunction into the open.

"It's like the nuclear explosion," said Dr. Irwin Goldstein, director of Sexual Medicine at Alvarado Hospital in San Diego, California. "It created sexual medicine. It allowed the taboo to be broken."

Since the diamond-shaped blue pill debuted 10 years ago, it has become embedded in the public psyche, late-night television jokes and urologists' offices.

"It is one of the revolutionary steps in sexual health," said Dr. Ira Sharlip, spokesman for the American Urological Association. "It ranks with the changes in cultural attitudes about sexuality that were started by [Sigmund] Freud, continued by [William] Masters and [Virginia] Johnson, the two researchers in the '60s, and the work that [Alfred] Kinsey did in the '40s.

"These were the huge steps in the development of our understanding of human sexuality and cultural attitudes of sex."

Men seldom talked about their bedroom troubles before the U.S. Food and Drug Administration approved Viagra as the first oral medication for erectile dysfunction in 1998.

"We lamented the fact that the men had so much shame about erectile dysfunction, how rarely anyone came for medical attention," said Dr. Abraham Morgentaler, an associate clinical professor of urology at Harvard Medical School.

"People who couldn't enjoy intimacy before have been given a second life...." he said. "We have had a better life because of it."

Viagra increases blood flow to the penis, enabling a man to have an erection. The drug does not induce desire and works when the man is sexually aroused, according to Pfizer, the makers of Viagra.

Urologists heard from patients who had tried the pill that Viagra made them feel as if they were 20-year-olds again. Anti-impotence drugs Levitra and Cialis have come along since.

"Along with the birth control pill in the '60s, this pill really changed people, society and medicine," Goldstein said. "It changed the patient-physician relationship. You can walk in and ask about sexual functions. It was a major taboo at some point."

Dr. Gerald Melchiode, a Texas psychiatrist, agreed that the pill has helped men open up about their sexual health, but finds the commercials a bit much.

"I've never run across men singing about their impotency," he said.

Since Viagra's appearance on the market, the dialogue about sexual dysfunctions has helped doctors identify other health problems in their patients, doctors say.

"You always hear someone drops dead,"said Dr. Chris Steidle, a urologist who wrote the book "Sex and the Heart." "It's not sudden death if you couldn't get an erection. It's a symptom of a heart condition. You wouldn't ignore a stroke, but you would ignore erectile dysfunction -- it's a significant symptom."

The man's penis is like "the tip of the iceberg" or "the canary in the mines," which serve as an indicator of overall health, Morgentaler said.

"There's now good evidence that shows that men with ED who have no other symptoms of anything are at increased risk for heart attacks and strokes," he said.

Thousands of studies have been conducted on Viagra. "The pill that thrills" is also being studied to see whether it gives athletes an edge in competition. It's been studied to see whether it helps women with their sexual health. Despite the deluge of attention, Viagra doesn't work for about 25 percent to 35 percent of men with erectile dysfunction.

For others, it has revitalized and strained marriages. Experts say Viagra gave a window into the psyche of men and women.

Some complain that sex should be spontaneous and that popping a pill ruins the romance. Eating food decreases the potency of Viagra, and some say the pill forces them to go on a schedule. Another complaint: Having to use Viagra makes a spouse or partner feel undesirable.

"Sometimes their spouse personalizes it," said Melchiode. "Why does he have to take this pill? Aren't I attractive enough? Aren't I sexy enough for him? That's not unusual for the partner."

Even when Viagra is effective, some men realize that it's not the magic bullet that solves their problems with intimacy, doctors said. Only about half refill their prescription.

"One has to think beyond just giving a pill to cure sexual problems," Melchiode said. "A typical example is a couple where there's been problems over the years and they can't deal with the problems on a verbal level, so they start withdrawing from one another. They build up a resentment and anger, they have trouble being close to one another and having sex with each other. Just giving them a pill isn't going to touch on all the problems of the resentment and anger."

Sex, it turns out, is part of a bigger web of relationship issues.

Morgentaler, author of "The Viagra Myth," said: "It's unrealistic that there's a pill that fixes all of these things."

All About Viagra • Impotence • Cialis • Sexual and Reproductive Health • Levitra