Brush your teeth, save your life?

ATLANTA, Georgia (CNN) -- Oral surgeon Dr. Gary Bouloux is about to pull a diseased wisdom tooth from his patient's mouth, using forceps that look like a pair of silver pliers. 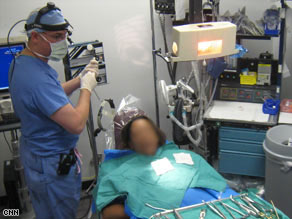 "We're in good shape," Bouloux assures his patient. In a smooth, quick motion, Bouloux snatches the white molar from the woman's gum with a loud snap.

And it might help cut her heart disease risk, too.

In theory, by removing his patient's teeth ravaged by gum disease, "we reduced the number of inflamed and infected sites in her mouth, which may reduce her overall inflammatory burden and thus reduce her risk for cardiovascular disease," said Bouloux, an assistant professor at Emory University in Atlanta, Georgia.

Doctors have known for years that gum disease and heart disease are linked, but they have yet to reach agreement on the exact reasons behind the connection.

Heart disease patients often have several risk factors such as high cholesterol or poor diet, making it impossible to single out bad dental health as a contributing factor.

Heart disease is the nation's top killer, claiming a staggering 450,000 lives in 2004, according to the American Heart Association.

Although it's unknown how many of those deaths are linked to gum disease, oral pathologist Dr. Dwight Weathers of Emory University suspects that the number would be high, "given that 85 percent of people over age 65 and probably half of people younger than that have some form of periodontal disease. Wow. That would be a big number."

Poor dental health is so prevalent that the number of lives saved by eliminating gum disease worldwide would "definitely be in the hundreds of thousands," said Dr. Steven Offenbacher, a University of North Carolina research professor.

A substance produced in the body called high-sensitivity C-reactive-protein (hs-CRP) is suspected to play a role in the link between gum disease and heart disease.

Acute gum disease increases the amount of hs-CRP in the bloodstream, which is a natural response to inflammation caused by injury or infection. The American Heart Association says hs-CRP may signal an increased risk for heart attacks.

"There's a lot of evidence to suggest that inflammation can be a hidden killer," said Offenbacher, who's been researching links between gum disease and heart disease for 15 years.

Dr. Michael Kowolik, who researches gum disease, inflammation and hs-CRP at Indiana University, warned that "even if we think our mouths are healthy, we still may be at risk. It's possible that many people have died from heart disease linked to their poor dental health, and they just didn't know it."

Gum disease can sneak up on its victims without any warning signs, according to the American Dental Association, which recommends prevention by proper diet, brushing, flossing and dental visits.

Whether hs-CRP is merely a cardiovascular danger signal or a direct risk factor is a hotly debated issue in the medical community, said Emory cardiologist Dr. Arshed Quyyumi.

Research could determine hs-CRP as a full-blown risk factor for heart disease, the same as smoking, high cholesterol or obesity. In non-human lab experiments, "you can even show some direct damage" to cells by hs-CRP, Quyyumi said.

Finding out more about the effects of gum disease on the heart would require a massive five- to 10-year-long study using tens of thousands of people, he said. Only then could doctors truly point to better dental care as protection against heart disease.

People included in the research would have to be very carefully chosen so their risk factors could be properly isolated into various control groups.

"Many people with bad teeth also may have risk factors for heart disease," Quyyumi said. "They may smoke a lot or be overweight."

Also, future studies would do well to include more cooperation between cardiologists and dental researchers, Offenbacher said.

"The best thing that could happen on a national level would be to integrate dental findings into the cardiology studies," he said.

Apart from hs-CRP, scientists are looking at mouth bacteria as another possible link between gum disease and heart disease.

Researchers at Ireland's Royal College of Surgeons in Dublin are developing a drug based on a theory that bacteria travel from bleeding gums into the bloodstream, where they attack the heart.

Project leader Dr. Steve Kerrigan said the drug would hinder proteins that allow bacteria to clump with blood cells. The clumps restrict blood flow to the heart, creating a risk for a heart attack, he said.

"We would like to think that we will have a very solid drug target in the next five years," said Kerrigan, who said his project has a 1 million pound grant from the Health Research Board of Ireland and Britain's Wellcome Trust.

But the theory that oral bacteria pose a threat to the heart is another subject of intense medical debate.

There's no doubt," Bouloux said, that during oral surgery to remove diseased teeth, bacteria do enter the bloodstream. "But is there any evidence of that association with heart attack and stroke? No."

Kerrigan acknowledges that more research is needed. "There would be huge amounts of money thrown at this if there was a study that showed a direct cause and effect between oral bacteria and heart disease."