People in their 60s and 70s who have high blood pressure may want to make sure they get enough sleep. A new study suggests that if they log fewer than 7.5 hours under the covers every night, they're at greater risk of heart attack, stroke, and sudden cardiac death than their peers who get more shut-eye. 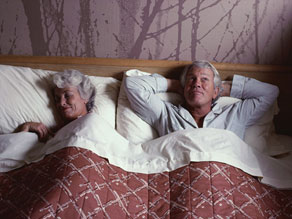 Seven to eight hours seems to be enough sleep for most people, although older people sleep less.

Those who got limited sleep and also had the riser pattern were more than four times as likely to have heart attacks and strokes as those without the combination, according to the study published this week in the Archives of Internal Medicine.

It's not clear whether the shorter sleep times were due to insomnia, sleep apnea, or other problems, or exactly how much time the study subjects actually spent snoozing. (Or whether they were taking any medication for sleep issues, for that matter.) Health.com: Prescription sleep medications: weighing your options and choosing a drug

The research team, led by Kazuo Eguchi, M.D., Ph.D., of Jichi Medical University in Japan, asked 1,255 men and women with hypertension how much time they spent in bed (not how much they actually slept), and then monitored their blood pressure for a 24-hour period.

Those who spent fewer than 7.5 hours between the sheets were 1.7 times more likely to have some type of cardiovascular event in the next couple of years, while those who slept little and had a riser blood-pressure pattern were at 4.43 times greater risk.

This type of study can't determine whether simply telling people to spend more time in bed would lead to better sleep or a lower risk of any of these problems. But researchers do know that a lack of sleep can throw off the circadian rhythms of several body processes.

Sleep deprivation contributes to over-activation in the sympathetic nervous system, which is responsible for revving up our fight-or-flight response.

"There's a lot going on during sleep," says Kristen Knutson, Ph.D., a sleep researcher at the University of Chicago who was not involved with Dr. Eguchi's research. "We think whatever is happening in the brain, in the body, is sort of helping to maintain a multitude of processes -- endocrine, metabolic, cardiovascular." Health.com: How much sleep do you really need?

In her own research, Knutson has shown that healthy young people who are deprived of adequate sleep have impaired glucose metabolism, increased appetite, and higher blood pressure.

Seven to eight hours seems to be enough sleep for most people. While older people often sleep less, Knutson says, it isn't because they need less sleep; they may just have a harder time getting enough shut-eye than younger people. (Some researchers believe that sleeping less as one gets older is a normal part of the aging process.)

Regardless of age, getting a good night's rest seems to be more difficult than ever, according to experts.

"There are so many demands on our time nowadays; we have dual-income families and the Internet and cable TV and 24-hour stores," says James E. Gangwisch, Ph.D., an assistant professor at Columbia University Medical Center in New York City. We live in a 24-hour society, too: Gangwisch notes that when he was a child, it was impolite to phone someone after 10 p.m. "I don't know if there's so much of a rule like that anymore."

Simply sleep hygiene, along with the avoidance of late-night TV and the Web, can help most people get better rest, experts say. Keep away from caffeine and alcohol at night, get enough exercise during the day (but don't work out too close to bedtime), stick to a regular sleep schedule, make your sleep environment dark and quiet and be sure that heat and humidity levels are comfortable, and set aside enough time in bed to actually get an adequate amount of sleep.

As for the riser pattern, researchers have known since the late 1990s that it's linked to heart disease. However, it's not clear how this pattern relates to a person's sleep and whether it is a cause of cardiovascular problems, a symptom of heart trouble, or both. Health.com: Heart health -- Step by step

Rising blood pressure at night does compound the effects of a shorter sleep cycle, so the cardiovascular system spends less time at a resting, lower blood pressure, says Gangwisch, who has studied sleep duration and mortality but did not participate in Dr. Eguchi's research.

"It kind of sets up the cardiovascular system to operate at a higher pressure equilibrium," he explains. Because the heart and blood vessels must work harder, it leads to a stiffening of the walls of the vessels and overgrowth of the heart's main pumping chamber.

All About Heart Attacks • Sleep Disorders