MADRID, Spain (CNN) -- The mother of a Spanish man who died from the human form of mad cow disease has also died from the illness, Spain's Ministry of Health said Wednesday. 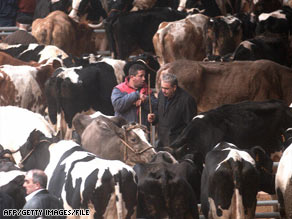 Spain has taken steps to avoid mad cow disease, and there is no danger from eating meat, officials said.

It is believed to be the first case in the world where two members of the same family have died from mad cow disease, said Juan Jose Badiola, director of Spain's national research center for mad cow disease.

"It's noteworthy that there's a double case in the same family," Badiola said.

Until now, Badiola added, clinical evidence that he's seen from the United Kingdom and France -- which have had the most deaths due to the human form of mad cow disease -- have not recorded two cases in a single family.

The mother, in her early 60s, died last month. The government confirmed Wednesday that it was because of mad cow disease but did not, by custom, make her name public.

Her son, 41, died in February from the same disease, Badiola said.

The latest confirmed case makes a total of four deaths in Spain from mad cow disease since 2005.

Three of these cases in Spain were in the same northern province, Leon, which is another unusual aspect that will be studied, Badiola said.

Ten years can pass between eating contaminated tissue and the appearance of the human form of the disease, called variant Creutzfeldt Jakob disease, health officials say.

The health ministry said there is no danger from eating meat in Spain, because of existing controls.

The steps to avoid the disease, taken after the first cases of mad cow disease appeared in the United Kingdom, included isolating infected animals and prohibiting cattle feed of animal origin or with animal proteins, the ministry said.

"The appearance of these sporadic cases is within the predictions that were made at the European level more than eight years ago," the ministry statement said.

Badiola said that it's likely the mother and son contracted the disease before stricter controls against mad cow disease began in 2001 in Spain.

The pair had similar eating habits, Badiola said, which included eating animal organs, such as kidneys and livers, and they may also have eaten animal brains.

Researchers will try to determine whether the mother and son shared a genetic structure that might have been more prone to contracting the illness, Badiola said.

The family's home was in a village near the provincial capital of Leon, 333 kilometers (206 miles) northwest of Madrid.

The other case in that province was of a woman, 50, who was a local government worker in the provincial capital. She died in December from mad cow disease.

The first confirmed death from mad cow disease in Spain was in 2005, when a young woman died near Madrid.

In addition to the cases in Spain, as of June the following numbers of cases of human mad cow disease had been reported: 167 in the United Kingdom; 23 in France; four in Ireland; three in the United States; two each in Netherlands and Portugal; and one each in Canada, Italy, Japan and Saudi Arabia

All About Mad Cow Disease