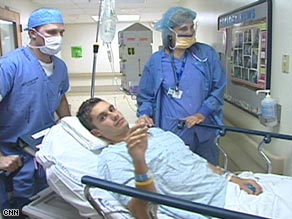 Eric Shanteau said he felt angry when he found out he had testicular cancer.

"Getting to the Olympics was, has always been, my swimming dream since I was 8 or 9 years old. You know, right after I started swimming it was, 'I want to make an Olympic team. That's where I want to be'."

In June, a week before the qualifying round of the Olympics he was told he had testicular cancer. "My initial reaction was probably anger more than anything else," he says. "I'm used to being in control of everything. I'm in control of how I train, how I race and then to all of a sudden have that control ripped away from me was tough."

After weeks of tests to determine the "stage" or spread of the cancer, Shanteau's team of doctors cleared him to compete in the Beijing Olympics, which meant carefully monitoring his tumor but delaying treatment. Though putting off the surgery was controversial to some, Eric says it was an educated choice based on numerous doctor evaluations. "I hope people understand that if I was in a different position with my test results, then I wouldn't have put off having surgery."

He swam a personal best in the 200 meter breaststroke. He did not qualify for the finals.

Cancer was a motivator, he says, because he knew it meant he could be facing his last competition. He put everything he had into that heat. "Leave it all in the pool, and I don't look back and regret anything as far as how I raced."

Once back from Beijing, Shanteau invited CNN to spend time with him the night before his surgery in Atlanta, Georgia. Though admittedly a little scared, he spent the evening relaxing with his family, cooking dinner, walking the dog.

A source of inspiration, he says, were fans who shared their stories of beating cancer.

"They send me their story and it helps me to learn that people are going through the same thing I am all over the world," says Shanteau. "They all affect me in a different way and it's been really encouraging to share in this experience with other people."

Shanteau says he experienced no symptoms of cancer and came across the tumor by chance. "I've been in a Speedo half my life," he says. "So I am really comfortable with my body. One day I just felt something that wasn't suppose to be there. I decided to go and get it checked out."

He adds that although he had the "greatest excuse in the world" -- an Olympic dream -- to ignore the lump, he understood the importance of early detection. Shanteau's father Rick, is battling lung cancer and responding well to treatment.

"A lot of guys, if they hear a rattle in their car, they're at the mechanic the next day," he says. "But if they feel something [physically] that they don't think should be there, it takes them a year to get to their doctor and that just is not smart. There's really no excuse, because it can save your life."

Later that week, Shanteau's pathology results revealed that the operation removed the most of the cancer. "The majority of it is gone." he tells CNN. "There is a small chance it could come back but I shouldn't need chemotherapy at this point, so I am really optimistic."

His treatment plan is to keep a close eye on his health for the next year with regular medical tests. "Obviously, it would have been nice if the doctor said, 'You're completely in the clear,' but my results are exactly what the doctors expected."

Eric says the cancer diagnosis gave him a different perspective on life. "I appreciate life much more now," he says. "I don't let myself get upset about the little nitpicky things anymore. Food even seems to taste better. It is really great."

As for Shanteau's swimming career, he plans to compete in the 2009 World Swimming Championship in Rome, Italy.

"2012 [the next Olympics] is a push for me. Right now I'm just kind of taking it year by year and we'll see what happens."

All About Summer Olympics • Cancer