NEW YORK (CNN) -- New York City's rate of HIV infection is about three times the national rate, according to estimates released Wednesday by the New York City Department of Health and Mental Hygiene. 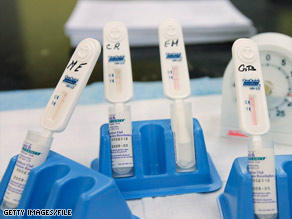 Rapid HIV test swabs incubate at the Iris House in New York in 2007.

The findings are based on new lab technology and a newly derived statistical model developed by the Centers for Disease Control and Prevention. The lab technology enables health officials to determine whether HIV-positive individuals contracted the virus within the past five months, and the statistical model allows researchers to then make projections about a population's infection rate.

HIV, or the human immunodeficiency virus, is the virus that causes AIDS.

The Health Department points to the city's demographics.

"The populations that bear the greatest burden nationally -- blacks, for example, and men who have sex with men -- are highly represented in New York City," Health Commissioner Thomas Freidan said in a written statement. "Because HIV is more prevalent within those groups, the risk of HIV infection per sexual contact is higher."

In June, the city launched a three-year initiative to administer HIV tests to the 250,000 Bronx adults who have never been tested. The program was announced just days after release of a study finding a high rate of "unsafe sexual behavior" in the city.

Freidan said the study showed that 36 percent of gay and bisexual New York men who had five or more partners in the previous year did not use condoms consistently.

"This is a core group which is at high risk for getting and spreading HIV," Freidan said.

In July, a study of 452 men interviewed anonymously at gay bars and clubs found 39 percent of those having sex with other men had not revealed their sexual orientation to their doctors, significantly diminishing their likelihood of being tested for HIV.