How I survived a heart attack at age 43

When I had my heart attack at 43, all my doctors were really surprised. I was young, I'm not overweight, and I don't eat a lot of fatty foods. 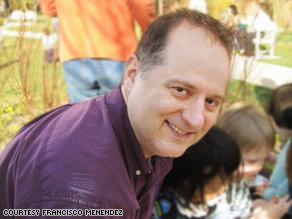 At first, Francisco Menendez thought the tightness in his chest was indigestion.

In fact, I never eat junk food. My father had a heart attack, but he was in his 70s, so that is not a significant risk factor.

However, a closer look at my medical records would have suggested there was a problem. My total cholesterol was around 400, and my triglycerides, which are really affected by diet and exercise, were 600 to 700. A healthy number is 150 or below.

I was not on a statin, but the doctors were urging me to start exercising more and to cut down on refined carbohydrates, like pasta and bread. That can really make your triglycerides shoot up, and I love all those things.

The night of my heart attack I was home, and I felt a lot of pressure in my chest. Not pain, really. I thought it was indigestion. It went on all night and even though my wife Ingrid urged me to go to the hospital, a heart attack was the last thing on my mind.

The next morning the pressure was so great I could barely walk, so I took a taxi to the hospital. I know you are supposed to call an ambulance, but that's what I did. When I got to the emergency room, I knew what to say: "I have chest pressure, and I think I am having a heart attack." It was 6 a.m. and they wheeled me in and started giving me blood thinners right away.

The doctors were excellent, and they told me they were going to give me an angioplasty. That scared me because after my dad had his angioplasty, he had to have open-heart surgery. I didn't want that. Health Magazine: How doctors diagnose and treat a heart attack

The oddest thing about the angioplasty was that for six hours they told me not to move my foot, and I didn't know why. Turns out there is a plug in your skin where they put the needle in, and if it comes loose your blood shoots out like shaken Champagne because you are on blood thinners. I wish they would have told me that, because I didn't know why I needed to hold my foot still.

I ended up having three angioplasties, but my heart attack was mild. It turns out my heart was less than 5 percent damaged. I ended up on a lot of medications. I take a statin, TriCor, and Plavix, and a baby aspirin every day.

I have a stress test every year and a half, and so far my cholesterol looks OK; it's about 160. I don't think about myself as a person who had a heart attack, but I think my wife worries.

I still hate to exercise, and I do eat bread and pasta, but mostly my diet is fine.

The worst thing about being a young heart-attack survivor is knowing I will have to be on these medications forever. I am convinced that if I became a strict vegetarian and got all the stress out of my life I could go off the meds. But that would require me to quit my job and move to the country, and I am not ready to do that yet. -- As told to Bryan Miller