WASHINGTON (CNN) -- Investigators had a "significant break" in tracking the salmonella outbreak when they found the bacteria on a jalapeño pepper imported from Mexico at a Texas food supplier, the Food and Drug Administration announced Monday. 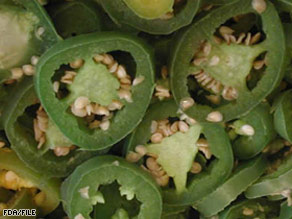 The FDA has discouraged all consumers from eating raw jalapeño peppers.

The discovery may provide a clue to the source of a recent outbreak of Salmonella Saintpaul. The bacteria have sickened more than 1,200 people in 42 states, according to the Centers for Disease Control and Prevention.

"One of the jalapeño peppers has tested positive with a genetic match to the Saintpaul strand," said Robert Tauxe, deputy director of the CDC's Division of Foodborne, Bacterial and Mycotic Diseases. Consumer Tips Blog: Hold the jalapeños

He said officials are "looking at the chain that the peppers would have passed through to decide if any of them are a point of contamination."

Watch more on the salmonella outbreak »

"While this one sample does not give us the whole story, this genetic break is very important," he said. "This will hopefully help us pinpoint the source of this outbreak."

The bacteria were found at a distribution center in McAllen, Texas, and the distributor has agreed to recall the products. Although the pepper was grown on a farm in Mexico, Tauxe said, investigators are not yet certain where the bacteria originated.

"This does not mean that the pepper was contaminated in Mexico," he said. "We aren't only looking for the source, but the reason for the spread [of the outbreak]."

The news comes just days after the FDA lifted its ban on consumption of certain raw tomatoes. The FDA has not ruled out tomatoes as the source of the original outbreak, but investigators have determined that tomatoes currently in fields and stores are safe, Dr. David Acheson, the FDA's associate commissioner for food protection, said Thursday.

Learn about the differences between salmonella and E. coli »

The FDA is still investigating fresh tomatoes as a possible source of the outbreak. It is possible that tomatoes were paired with another food that was contaminated, Tauxe said.

Watch more on the FDA investigation »
Before Monday's warning, the agency had discouraged high-risk people -- elderly people, infants and those with impaired immune systems -- from eating serrano and jalapeño peppers.

Two elderly men with pre-existing conditions died while infected with Salmonella Saintpaul, and the FDA said the infection could have contributed to their deaths.

All About Food Poisoning