(CNN) -- Lakshmi Tatma whirls around in her walker at a charity school for disabled children in Jodhpur, Rajasthan, India, one tiny arm holding a balloon, her bandaged legs splayed wide apart, an enormous smile on her face. 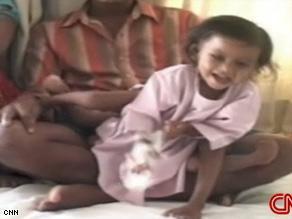 Lakshmi Tatma's family and neighbors believed that with eight limbs, the baby was the embodiment of a goddess.

Twirling in a wheeled plastic disc is unremarkable for most 2-year-olds but a big achievement for Lakshmi, a child born with eight limbs who her rural villagers believed was a goddess, not a girl, and who underwent a surgery last fall unlike any her doctors had ever performed.

Her story is equal parts mythology and goddess worship, leap of faith and medical miracle.

Lakshmi was born in October 2005 in the Bihar region, one of the most remote areas of India, populated by Hindu farmers.

It had been raining for days, but the rain stopped the day Lakshmi arrived. Her mother, Poonam, says she had a dream just before her daughter's birth that she should build a temple to Lakshmi, the goddess of wealth and the embodiment of beauty.

And when the girl was born during the Festival of Lakshmi and the new mom saw that she had eight limbs, just like the goddess Lakshmi, Poonan and others were convinced that she was the goddess incarnate.

In medical terms, Lakshmi had a parasitic twin, a condition so rare that no reliable numbers exist on its prevalence. The incidence of conjoined twins is one in 50,000, and Lakshmi's kind of twin forms in only 3 percent of all types of conjoined babies.

The Girl With 8 Limbs

The National Geographic Channel airs its special on Lakshmi in the United States and Canada.

Villagers flocked to see her, some even offering to buy Lakshmi as a circus act. News of her eight limbs spread to Sparsh hospital in Bangalore, one of India's most technologically advanced medical institutions, and to Dr. Sharan Patil, an orthopedic surgeon. Lakshmi undergoes surgery

Patil had seen plenty of disfigured children. He has removed a foot and leg sprouting from a boy's spine, but he never had encountered a child with eight limbs. "In spite of whatever the beliefs were, as a medical man, I thought she needed help," Patil said.

Watch an early report on Lakshmi »

After traveling to Lakshmi's remote village for her first exam, he was encouraged by the fact that the upper set of limbs, which he referred to as the "Lakshmi" limbs, had the best motor control.

But he was troubled by an open, infected sore on what looked like Lakshmi's backside, which turned out to be the neck of the twin. Patil said Lakshmi had experienced infections and fevers every week of her young life. He worried that they could kill her.

Patil offered to pay for all of Lakshmi's medical expenses if her family would bring her to Sparsh hospital to evaluate whether doctors even could help her. Doctors conducted a series of MRIs and bone scans, as well as an endoscopic exam, to get a sense of the functional limbs and organs. As Patil explains, it took his team about a month of detailed testing before deciding that the twin could be removed.

Neither Patil nor anyone on his team had ever done a surgery like this. But they also knew that rare, conjoined twins like Lakshmi have a low survival rate and believed Lakshmi would surely die in her teens if nothing was done.

All the while, Lakshmi's parents struggled with their decision. Should they give up their little goddess, loved by them and revered by her village, for an operation that may or may not save her?

They decided to take the risk. On surgery day, as Lakshmi lay on the gurney, her mother sobbed uncontrollably. Then, she let go. There was no going back.

On November 6, 2007, a team of 30 surgeons began working on Lakshmi. The first step was an organ transplant; Lakshmi had two functional kidneys, but one was in the twin, so doctors transplanted the parasitic twin's kidney. They had to disentangle organs, including entwined intestines. One of the trickiest aspects involved the spine and pelvis and legs: specifically, reconstructing the pelvic ring without damaging nerves and picking the right legs, so Lakshmi could one day walk. Lakshmi recovers after surgery

Sixteen hours into the surgery, the twin, with its extra arms and legs, was severed.

"The hero in this story is Lakshmi," the team's senior neurosurgeon, Dr. Thimappa Hedge, said at the time. "It's a little girl who withstood a formidable operation very well."

Watch Dr. Gupta report on Lakshmi days after her surgery »

CNN joined media from around the world in covering Lakshmi's release from Sparsh hospital, reporters straining to see a little girl who once had eight limbs and who now had four.

Patil says Lakshmi continues to recover at the charity school outside Bangalore, but her family may head back to Sparsh hospital soon. Lakshmi still needs surgical attention to her spine and internal organs. Her feet are clubbed, and she'll need extensive rehabilitation to walk.

But her doctors say her limbs are functional and her organs are intact, including her ovaries and uterus, and they believe she will continue to improve and may even have her own baby one day.

Her parents call her transformation a debt that her family can never repay.