How to recharge your New Year's resolution

ATLANTA, Georgia (CNN) -- Mike Moriarty has big expectations for the new year. "My goal is to fit into these pants better," he said, patting his stomach. 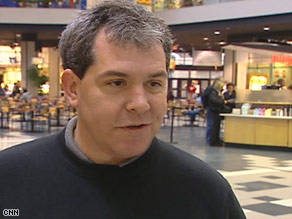 Moriarty, 47, an attorney from Holyoke, Massachusetts, doesn't want to call his weight-loss plan a resolution.

"They are very hard to stick with," Moriarty lamented. "I make them all the time and break them in about three hours."

Moriarty isn't the only one who has a tough time sticking with a resolution.

Clinical psychologist Mark Crawford from Atlanta, Georgia, said almost everyone has something he or she would like to change or improve, but succeeding is another story.

"The first of the year gives everyone a fresh start or a clean slate," Crawford said. "That's what everyone feels good about: 'I can just start new with no failure and go from here.' "

Some of the most popular new year's resolutions, according to Crawford, include improving health and fitness by exercising more and eating less, getting financial affairs in order by paying down debt or saving money, getting organized, spending more time with family members and quitting a bad habit such as smoking.

Some people sabotage themselves by picking unrealistic goals, Crawford said.

"The set themselves up by setting resolutions they really don't think they're going to keep," he said.

"I would encourage people to not make resolutions if you don't think you're going to keep them, because what that does is it sets you up for failure in the future."

He suggested using a slip-up to adjust your course and find out what you need to do differently. "Never use it as an excuse to give up your goal or abandon your resolution," he said.

Watch for more tips on recharging your resolutions »

He offered four tips for succeeding.

First: Be specific about your goal.

"For example, saying that you want to lose weight is way too general. You should say, 'I want to lose 10 pounds this year,' " Crawford said.

Second: Set a realistic goal. "Very few people are going to lose 50 pounds in a year," he said. "But losing 5 to 10 pounds is a goal everyone can reach."

Third: Establish a set of steps to help you reach your goal. "You want to add things like, 'I'm going to exercise three times a week and I'm going to eat smaller portions.' Those are the steps that are going to get you to the goal."

Finally, Crawford recommended setting a specific time frame. "Very few people can stay with a goal for an entire year," he said.

"I would say set a goal for about two weeks. Stop to see how you're doing. Pat yourself on the back if you're doing well," he said. "And if you're not, figure out why so that you can revise your plan."

He said you'll know if you're succeeding if you can stick it out for four to six weeks.

"Make it to Valentine's Day, and your chance of continuing is much better," Crawford said.

Moriarty is being optimistic about his goal to lose weight. He swears this go-around will be different.

He's already taken Crawford's advice and has set up steps to help him succeed.

Moriarty knows there will be setbacks but said "I've succeeded in the past, but if you lose the drive, you dust off and you get it back. That's what I hope to do this year."

All About Diet and Nutrition • Exercise and Fitness • Obesity