LONDON, England (CNN) -- Use your brain or lose it. That's the concern that's fueling a worldwide boom in brain fitness that shows few signs of slowing. 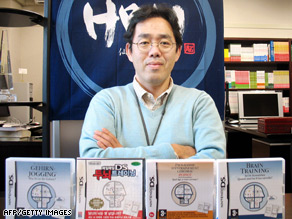 A slew of products, from games like Nintendo's Brain Age to more sophisticated computer-assisted software, are marketed at consumers worried about losing their mental sharpness.

The brain fitness software market has been growing at a dizzying pace. Worldwide revenue surged to $850 million last year, up from $250 million in 2005, according to SharpBrains, a company that tracks the mental fitness industry.

Recent evidence that mental exercises can be beneficial to the brain has helped the industry flourish. Although, researchers caution, the verdict is still out when it comes to the long-term effect of these programs on cognition.

"There is still a lot of work that needs to be done. There is no definitive consensus over whether these programs are as beneficial as people would like to think they are," says Dr. Mark Mapstone, associate professor of neurology at the University of Rochester Medical Center in New York.

One of the most popular products is Nintendo's Brain Age (also known as Brain Training) -- a collection of simple exercises like math problems, memory tests and word puzzles. The launch of the program in 2005 kicked off the mental fitness craze in Japan. Have brain fitness programs worked for you?

Since then, the industry has gone global and well beyond video games. Web sites like BrainBuilder.com and MyBrainTrainer.com offer members access to a variety of training exercises.

Other software programs like MindFit from Israel-based CogniFit are customized to each user.

Growth in mental training has been particularly explosive in the U.S., where aging Baby Boomers have begun to fret about their mental sharpness. According to SharpBrains, the U.S. brain fitness industry is forecast to exceed $2 billion by 2015.

"There is more awareness that the brain evolves depending on what we do in our lives. People who are getting older now are much healthier than they've ever been and want to keep doing things to keep their brains alive," Alvaro Fernandez, CEO of SharpBrains, told CNN.

The growing prevalence of Alzheimer's has also heightened anxiety about mental acuteness. According to researchers at the Johns Hopkins Bloomberg School of Public Health in Maryland, one in 85 people worldwide will have Alzheimer's by 2050.

There is still no clear evidence that brain training lowers the risks of Alzheimer's and dementia, according to Professor Clive Ballard, head of research of the Alzheimer's Society in the UK. He and many others agree that maintaining a fit lifestyle is the key to keeping your brain healthy. That means eating right, exercising regularly and remaining socially active.

However, many studies have suggested it's important to keep your brain stimulated. The real trick is to make your brain work in ways it's not used to, says Dr. Mapstone. Achieving that stimulation can be as easy as starting a new job or learning to play an instrument.

But computer-assisted programs provide some structure and make it harder for people to give up on them. "You can always put down a crossword puzzle, but games stimulate competitiveness and pull people in," he told CNN.

Products aimed at sharper minds are generating more than a passing interest, says Fernandez. He forecasts significant growth going forward, largely driven by insurers and governments which are keen to use technology to save on health costs.

Insurance company Allstate announced in October plans to distribute a brain fitness program developed by software maker PositScience among drivers 50 years and older. The company wants to see if the software, which trains visual-related parts of the brain, will lower accident rates among older drivers.

In Canada, the government of Ontario invested $10 million earlier this year in a brain fitness center that will develop mental training products as well as software designed to assess cognitive health.

"There are huge health savings implications if you can develop technologies that are useful and preventive," says Alvarez. "[Brain fitness] is not just some fad. The market is much deeper than Nintendo."

All About Exercise and Fitness • Alzheimer's Disease • Video Games