(CNN) -- For one person, the idea of spending a cold winter's night alone seems great -- a perfect time to catch up on novels, watch cheesy movies, and drink hot chocolate with marshmallows. For another, the prospect is less comforting -- feelings of depression, anger, isolation set in as the hours go by. 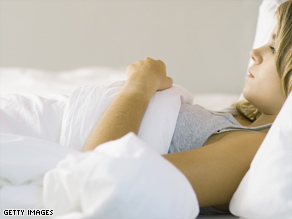 About 60 million people in the U.S. feel so isolated that it's a major source of unhappiness.

Research suggests that the degree of loneliness that any two people feel in a particular situation may vary widely, partly because of genetics. In fact, loneliness is half inherited, half environmental, says John Cacioppo, director of the University of Chicago's Center for Cognitive and Social Neuroscience.

In his recent book "Loneliness," with co-author William Patrick, Cacioppo defines loneliness in terms of the need for social connection and notes that a person can feel lonely even in a large crowd. At any given time, about 60 million people in the U.S. feel so isolated that it's a major source of unhappiness, the book says.

"Loneliness we see to be much more like hunger, thirst and pain than a personality factor per se," Cacioppo told CNN. "It's something everybody has, everybody has the capacity to feel that way, and it serves to call attention to a real biological need."

Using data from more than 8,000 people in twin studies and sibling studies, in collaboration with the Netherlands Twin Register, Cacioppo and colleagues found strong evidence that genetics accounts for about half of the differences in loneliness among people in the study.

Still, there's no way to tell how much of a particular person's loneliness is due to genetics, said Mark Leary, professor at Duke University who runs the psychology department's Self, Emotion and Behavior Lab.

Part of the explanation for loneliness is evolutionary, experts say. Humans would not survive in the wild alone -- imagine trying to fend off a wild beast with a stick by yourself -- so they feel a negative signal when they are disconnected from others, Cacioppo said.

"The gene pool is really protected best by variability along that dimension," Cacioppo said.

Not everyone is certain about this hypothesis. Ken Rubin, professor of human development at the University of Maryland in College Park, says loneliness has developmental, but not necessarily genetic, origins. Some individuals are at greater risk than others for feelings of loneliness because of development issues -- for example, shy children who are excluded or rejected by other children, he said.

Other factors involved in loneliness include individuals' levels of social skill, fear of rejection, and self-confidence, Leary said. Also, extroverts are more likely to form social connections than introverts, he said.

A recent study published in the journal Psychological Science shows that nostalgia can actually counteract the negative aspects of loneliness, such as low social support.

Researchers at the University of Southampton and China's Sun Yat-Sen University looked at children, college students and factory workers. Subjects answered questions about feelings of loneliness, social support and nostalgia.

The researchers found that while loneliness makes people feel they have low social support, nostalgia increases the amount of social support they feel that they have, helping to buffer the negative effects of loneliness at a particular moment in time.

The researchers have not looked at what repeated engagement in nostalgia might to do to someone's loneliness across time, said co-author Xinyue Zhou of Sun Yat-Sen University in an e-mail. But they are planning to investigate how this might be used in therapy -- for example, a simple exercise such as "asking people to list some keywords that capture the gist of a nostalgic experience" may have a positive impact, Zhou said.

While the study clearly shows that nostalgia makes people less lonely by reminding them of their social relationships, this principle may not work for everyone, said Leary, who was not involved with the research.

"Imagine an ex-convict who, before getting into trouble with the law, had strong family ties and good friendships, but is now ostracized, alone, and unemployed. My hunch is that nostalgic memories might make such a person even more lonely," he said. "Future research should look at possible exceptions to the general pattern that they obtained."

What to do about loneliness

People who are chronically lonely tend to want to avoid others, Cacioppo said. To cope, he first recommends participating in something such as community service -- working at a soup kitchen, for example, would show a socially disconnected person that others can be kind in their expressions of gratitude.

He also recommends developing an action plan -- don't go over the top with your goals, and realize it will take patience. "Relationships are positive because both parties are getting something out of it," he said. Also, while the old adage says opposites attracts, similarity -- attitudes, interests, and personalities -- is a strong foundation for building lasting bonds.

Finally, expect the best, he said. Both in friendships and in marriages, trust, honesty and forgiveness are key. A common misconception is that the most popular person is the least lonely, he said.

"It's really having one good relationship is all that it takes," Cacioppo said. "Spending all your time online getting 4,000 friends on Facebook is not useful. The number is not where connection occurs."