LONDON, England (CNN) -- If you've ever shaken someone's hand, only to watch them slather themselves with hand sanitizer afterwards, you're not alone. 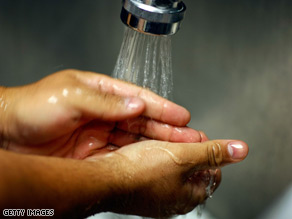 The little bottles of hand gel are everywhere you look, especially now during the prime cold and flu season in the U.S. and Europe. Even world leaders, it turns out, are equally concerned with fighting pesky germs.

President Bush offered Barack Obama hand sanitizer the first time they met at the White House in 2005, according to an account in Obama's book "Audacity of Hope."

Obama recalls shaking hands with Bush, who then "turned to an aide nearby, who squirted a big dollop of hand sanitizer in the president's hand." "Good stuff. Keeps you from getting colds," Bush said, according to Obama's account.

These days, you're likely to encounter a bottle of the "good stuff" just about everywhere. Eating at a restaurant, flying or taking public transport? Not without an application of germ-fighting gel first.

Here we answer five key questions about the hand gels that have become so ubiquitous in our lives.

Read more about the show »

Hospital-acquired infections complicate between five to 10 percent of hospital admissions in the developed world and 25 percent of those in developing countries, according to the World Health Organization.

Some 1.7 million infections are picked up in American hospitals each year. In England, hospital-acquired infections come at a cost of $1.53 billion (£1 billion) annually.

When did they become widespread?
The Centers for Disease Control and Prevention in the U.S. issued a recommendation in 2002 advising health care workers to use alcohol-based gels on their hands to combat hospital infections.

"Clean hands are the single most important factor in preventing the spread of dangerous germs and antibiotic resistance in health care settings," the CDC said when the guidelines were released.

Alcohol-based rubs, considered a more effective, quicker and easier alternative to soap and water for medical professionals, are now widely used in hospitals.

In 2004, the UK's National Patient Safety Agency launched a campaign, "Clean Your Hands," that promotes the use of alcohol-based hand gels immediately before and after patient contact.

Who's using them?
The use of hand sanitizer is just as commonplace in offices and households now as it is in hospitals and other medical settings.

Americans spend roughly $98 million on hand sanitizers alone every year, according to Information Resources, Inc., a Chicago-based market research firm. That figure has risen five percent over the last year.

Big consumer products companies like Procter & Gamble, Johnson & Johnson and Reckitt Benckiser are all trying to attract consumers, who are buying everything from antibacterial wipes and hand sanitizers to disinfectant sprays in a bid to wipe out scary germs.

"There has been a wave of new antibacterial product launches that are tapping into the consumer's fear of germs that they can't see," a report by market research firm Mintel said.

Do they work?
Alcohol-based hand rubs significantly lower the number of germs on skin upon contact as long as hands aren't visibly dirty. When hands are covered in grime like dirt or blood, it's better to wash with soap and water.

Researchers at the University of Michigan School of Public Health have found that alcohol-based hand sanitizers can play a critical role in preventing the spread of flu -- the latest evidence to support the use of hand gels.

In a study published earlier this month, researchers found wearing a mask and using alcohol-based gels lowered flu-like illness rates by as much as 50 percent.

"These initial results are encouraging since masks and hand hygiene may be effective for preventing a range of respiratory illnesses," Allison Aiello, co-principal investigator of the study, said.

Researchers at University College London Hospital have also been testing new cleaning products that could be even more effective in preventing hospital-acquired infections.

In a study, they found that the copper-based products kept surfaces sterile for longer periods of time and when used as a gel on hands were effective against dangerous bugs like Clostridium difficile.

Are they necessary?
Among health care workers, absolutely. The "Clean Your Hands" campaign in England and Wales has more than doubled the rate of hand hygiene, according to the agency that runs the program.

Outside of health care settings, alcohol-based hand sanitizers are considered a good complement to regular handwashing.

The CDC recommends washing hands with soap and running water for 20 seconds. When that isn't possible, the agency advises the use of alcohol hand rubs.

Sanitizers need to have an alcohol concentration of at least 60 percent in order to be effective.