The war against tuberculosis

LONDON, England (CNN) -- The global health community has been battling tuberculosis for more than a century, yet it remains a persistent problem. 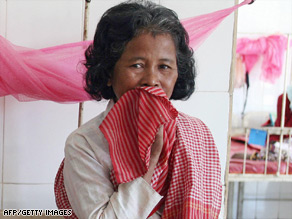 Tuberculosis is a global disease, but it is most devastating in impoverished countries.

The disease, which is contagious and spreads through the air when an infected person coughs, spits or sneezes, strikes everywhere, but predominantly affects the poor.

The countries most affected by TB are the so-called high-burden ones, or the 22 countries identified by the World Health Organization that combined contribute 80 percent of the global burden of TB.

Many health care systems in these nations don't have the resources, drugs and diagnostics to effectively deal with the disease, according to Dr. Mel Spigelman, director of research and development at the not-for-profit Global Alliance for TB Drug Development (TB Alliance).

See where in the world TB is most devastating »

"But even if we upgraded those systems, the lack of a really effective vaccine, the lack of better and faster drugs that shorten treatment to a reasonable time and the lack of good drugs for treating resistant disease -- make it hard for any health care system to effectively deal with the disease," he said.

TB is usually treated with a combination of antibiotics administered for six to 24 months. But many patients fail to finish the long course of treatment, which has led to the emergence of deadly strains of the disease that can't be wiped out by the usual drugs.

There hasn't been a new class of TB drugs developed in 40 years. Because it is mainly a disease of poverty, there hasn't really been a commercial market for new drugs, Spigelman noted.

However, growing awareness of the disease has led to greater emphasis being placed on finding new treatments. Scientists at Rutgers University recently developed a group of antibiotic compounds that could be strong enough to combat even drug-resistant strains of TB.

The project is exciting but is still in an early phase, according to Spigelman. He said it could be a good 10 years before a drug based on that research is available.

"We're going in the right direction, but unfortunately, the resources - given the magnitude of the problem - are still a small fraction of what is needed to have great chance of coming up with something that will turn the tide," he said.

All About Tuberculosis • Contagious and Infectious Diseases • Poverty