Even presidents need time to chill out 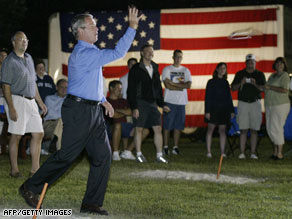 "When you get to the Oval Office, there are no easy decisions," says Kenneth Duberstein, who was chief of staff to President Ronald Reagan. "Any decision that reaches the president's desk is a close call. It's not black and white. It's shades of gray."

Presidents work best when they take regular respites from the burdens of the presidency, according to Duberstein and other White House insiders from the Nixon presidency through the current administration.

"The time off at the ranch or at Camp David was more than an escape," Duberstein says. "It was good for his physical and mental well-being."

"The daily routine of a president is really grueling," says Ron Nessen, press secretary to President Gerald Ford. "It's hard to get thinking time. Ford talked about how when he was swimming laps, it gave him time to think about things."

See what presidents have enjoyed doing in their free time »

Anecdotal evidence from the previous seven administrations jibes with research into decision making.

Keith Sawyer, a professor of psychology, education and business at Washington University in St. Louis, Missouri, says good ideas come from a combination of hard work and down time.

"Creativity researchers have discovered that there is a cycle. It is very difficult to have a good idea when you're working all out. It typically happens when you take time away," says Sawyer, author of "Group Genius: The Creative Power of Collaboration."

No wonder then, that the most recent presidents have turned to sports as a diversion from what's been called the toughest job in the world.

"Exercise was a huge part of his life," says Jody Powell, Carter's press secretary. "He enjoyed tennis very much. He ran just about every day."

To blow off steam, Clinton would go to the putting green outside the White House.

"Everyone knew to leave him alone," says Clinton press secretary Joe Lockhart. "It had to be a national security crisis to go out and interrupt him."

Even presidents who were not particularly athletic made a point of taking a break.

Coming this weekend: Fit to Lead »

"He would go over there and stretch out and get a couple hours reading or taking a nap if he was inclined, and that was built into the schedule," Dean says.

Early in his administration, Clinton worked too hard and his decision making suffered as a result, according to Lockhart.

"The first term, particularly the first couple of years, the president kind of set his own schedule and he worked from very early in the morning until very late at night. And he wore himself out, and I would argue, his decision-making ability was not nearly as good as it was in his second term," Lockhart says.

When Ford came down with the flu, he was forced to take four days in the residence. "His workload was cut way back so he had more time to think, and he came back and decided to make some major, major changes to his staff," Nessen says.

An avid runner, mountain biker and fisherman, "President Bush is good at finding ways to separate [from the job]," says Ari Fleischer, his former press secretary. "But even so, you never have an uninterrupted day as president. Every day, you have a National Security Council meeting. Every day you get interrupted by an intelligence briefing."

No matter how the president chooses to unwind, the enormous burdens of the job are never far away.

"Even in moments when you're physically trying to relax in whatever outlet you have, you have a member of the military within 15 feet with nuclear codes," Lockhart said. "That kind of takes the fun out of whatever sport you're into."