'Sex' actor: Being a bad patient can save your life

(CNN) -- You probably know Evan Handler as Harry Goldenblatt, Charlotte York's husband on HBO's "Sex and the City," or as Charlie Runkle, the agent for David Duchovny's character on "Californication." What you probably don't know is that he's a passionate patient advocate, based on his experience being treated for leukemia in the mid- and late-1980s. 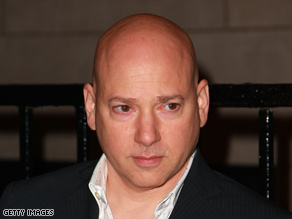 In many ways, Handler is the ultimate empowered patient. "I learned that I must always remain in control, double-check everyone's work, and trust no one completely," Handler wrote of his approximately eight months in the hospital. "I must have been sheer hell to be around. But I know that my cantankerousness saved my life on several occasions."

In his books "It's Only Temporary," and "Time on Fire," Handler wrote that during his months in the hospital, he was given intravenous drugs that were supposed to go to another patient, that nurses tried to give him medications his doctors had forbidden for him and that staff members refused to follow the hospital's posted hygiene precautions for immunosuppressed patients like himself.

Handler survived when statistics said he shouldn't have. He endured round after round of chemotherapy, one infection after another and a bone marrow transplant. In this conversation with CNN Medical Correspondent Elizabeth Cohen, Handler discusses firing your doctor, tattooing medical directives on your stomach and the importance of not doing exactly what you're told.

Elizabeth Cohen: Were you a "bad" patient?

Evan Handler: The irony of "bad" patients is that they actually do better for themselves. ... There were hundreds and hundreds of instances where my being a "bad" patient saved my life.

Cohen: You write about how nurses tried to give you drugs to which you'd had "horrendous adverse reactions" even though doctors had explicitly written in your chart you shouldn't have those drugs. A friend of mine had a similar problem, and we decided maybe he should have hung a sign around his neck with a list of the drugs he wasn't supposed to get.

Handler: That doesn't sound like a bad idea. [A doctor once told me about] a registered nurse who had a "Do Not Resuscitate" order tattooed on her abdomen. She said she felt it was the only way her wishes would be respected.

Cohen: You write about how you became "a criminal of sorts" by forging your doctor's signature on authorization slips so your bloodwork would be done by a lab that ran the tests more quickly. Were you afraid you'd get caught?

Handler: Nothing bad is going to happen to you if you don't do exactly as you're told. They weren't going to put me in jail. I worried about getting caught only because then I wouldn't be able to do it any more.

Cohen: You describe your first doctor as being nasty, hostile and disrespectful. He yelled at your father for calling him on the phone with a question about your care. He yelled at you when you were in the middle of chemotherapy and came to see him with a rash and a fever because the fever was only 100 degrees. Did you wait too long to fire him?

Handler: Oh, yeah. Doctors had told me that I would be endangering my care if I switched doctors, but that advice was criminal. Look, the only way to change things is through the marketplace. Recently I needed to have something in my mouth looked at. The doctor performed a biopsy without lidocaine -- just put a blade in my mouth and cut without telling me. I never went back, and I wrote him a three-page letter. You should leave a bad doctor, and if you have the energy, tell them why you left.

Cohen: When you were being treated for leukemia, you were very, very sick. You said sometimes you were barely conscious. How'd you keep up the stamina to keep double-checking everyone's work?

Handler: I was lucky to be able to maintain my strength and do it as long as I did, and my girlfriend at the time, Jackie, was willing to sit by my side and advocate for me, and she was very skilled at doing it. You wonder, how many people die from illnesses because the strength to keep up vigilance runs out?

All About Sex and the City • Leukemia • Cancer