CLEVELAND, Ohio (CNN) -- Doctors working with NASA scientists believe that they may have a way to combat one of the greatest health dangers of space travel: bone loss. 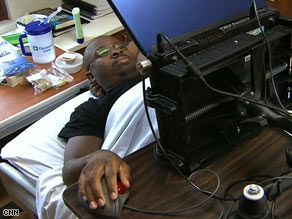 For three months, Roderick Jones lay flat on his back, except for two hours of exercise on a vertical treadmill.

"We know that bone loss in space is an extremely significant problem. Astronauts lose about 10 times more bone every month than a postmenopausal woman on Earth loses," says Dr. Peter Cavanagh, former director of the Cleveland Clinic Center for Space Medicine. Bone loss occurs presumably because astronauts don't get enough load-bearing exercise in zero gravity. Cavanagh says that their findings may later contribute to new treatments for the millions of Americans who suffer from osteoporosis.

Roderick Jones is doing his part to help further the field of skeletal health by staying in bed -- for 84 days straight.

The 40-year-old chemist was in between jobs when he saw a curious ad on the Internet. He recalls reading, "Do you have projects you'd like to complete. Would you like a small vacation while you're actually helping the NASA space program?" Rod had always been a science fiction fanatic. A chemist by trade, he was in between jobs and trying to save for a family move from Ohio to Georgia. After several interviews, physiological and psychological tests, it was determined that Rod had the right stuff.

For three months straight, Rod lay not only in a horizontal position, but with his body tilted 6 degrees towards his head. Most of his days were filled with watching television, surfing the Web and writing in a log he called the, "Bedpan Chronicles" named for what he deemed to be one of the toughest parts of the assignment. He ate, slept, read, typed, talked on the phone, and drank -- all while lying down. iReport.com: Would you stay in bed for the space program?

His compensation for being bed bound for 12 weeks? $12,000 for the entire project. Rod is the twelfth study subject, and NASA is halfway through the project. Cavanagh points out how difficult enrollment has been, "So far, for every 300 applicants, only one person has the right stuff."

Researchers claim that lying at a 6-degree angle is the best way to simulate zero gravity, here, on Earth. This simulation doesn't come cheap. NASA estimates that placing one subject in bed for a period of three months or so costs about a quarter of a million dollars.

NASA's goal is to figure out how to stop the physiological changes of space travel, most importantly bone loss. So far exercise seems to be a major part of the solution. Currently, astronauts are given two and a half hours daily for exercise and setting up the workout apparatus.

To gauge the positive effects of exercise, half of the study subjects are selected to exercise for two hours a day and the other half must stay in bed at all times. Rod is one of the exercisers. He's lost 10 pound in the process.

Rod and his cohort exercise on a device called the enhanced-zero gravity locomotion simulator or eZLS. It's a vertical treadmill on which the runner is suspended in a system of harnesses, pulleys and bungee cords -- pushing them into the device. The astronauts use a similar device on the International Space Station.

CNN Chief Medical Correspondent Dr. Sanjay Gupta tried out a version of the eZLS at the NASA Glenn Research Center's Exercise Countermeasures Laboratory, which is working in partnership with the Cleveland Clinic on the vertical treadmill project.

"I feel like with each step, I feel like I can bounce and jump with each step," he said. "Like this is a pace that I could run easily if I was vertical as opposed to horizontal. It just takes some getting used to."

NASA Glenn Project Manager Gail Perusek says the eZLS costs in the low millions, a low price to pay for big goals. "Exercise in space is extremely important," he said. "Crew members experience right now bone loss and muscle atrophy that we need to counteract if we're going to send astronauts back to the moon and eventually to Mars."

Cavanagh reports, "So far the results are very encouraging. If you design an exercise program to try and replace what that person does during their earthbound days, it seems that you can't completely prevent bone loss, but you can attenuate it greatly."

All About Osteoporosis • NASA