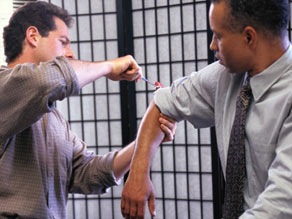 Some doctors say men are more likely than women to ignore symptoms or deny that they even exist.

Once they regain the ability to speak, these doctors will say things such as "I don't even know where to start," and "You don't have enough room in your story for all the symptoms men blow off."

Conventional wisdom, they say, is true. Women listen to their bodies and go to the doctor when something isn't right. Men tend to seek medical attention when they're at death's door -- or when their wives prod them into going.

"I think it's a macho thing," says Dr. Barron Lerner, professor of medicine and public health at Columbia University. "Or maybe it's denial. Maybe they think if they deny a problem, it doesn't exist."

"I call it the ostrich phenomenon," says Dr. Harvey Simon, associate professor of medicine at Harvard Medical School and editor of the Harvard Men's Health Watch newsletter. "Guys are very prone to sticking their head in the sand and hoping when they emerge everything will be back to normal. It's a very, very bad idea."

While the list, according to these physicians, is endless, here are the top five symptoms men ignore -- sometimes until it's too late.

You'd think this would be the last thing a man would ignore, but our men's health experts say it happens all the time.

"They think, 'Oh, I'm just out of shape, or I'm having a little indigestion, or I'm under pressure,'" says Dr. Joseph Scherger, a clinical professor of family medicine at the University of California, San Diego. "It's quite classic for men to do that."

Simon says, "I tell my medical students that the most common symptoms of a heart attack is chest pain, and the second most common one is denial."

"Belly fat is the worst fat you can have," says Dr. Harry Fisch, a professor of clinical urology at Columbia. "A big belly is a sign a man has low testosterone levels. And the lower the testosterone, the greater the risk of diabetes and coronary artery disease."

While a woman might go on every diet in the world to lose weight, men often have a different solution: They lower their belts.

"I've had men say to me, 'See, my pants size hasn't changed.' I say, 'Baloney. Your belly is still there. It's just above your belt,' " says Simon.

Impotence may be purely psychological, but it also could be a sign that a man has cardiovascular disease.

"The penis is the dipstick of the body's health," Fisch says.

If the arteries that supply blood to the penis aren't working right, those supplying blood to the heart and brain might not be working so well either.

Our experts advise men with erectile dysfunction to use their doctors for more than just Viagra dispensers.

"A doctor ought to be working these men up for coronary artery disease, high blood pressure and cholesterol, which are often linked to erectile dysfunction," Simon says.

Urinating more frequently can be a sign of prostatitis, or inflammation of the prostate gland.

"I'll ask a patient if he's getting up at night to urinate, and he'll say, 'Oh, yeah, two or three times.' I ask him if that bothers him, and he'll say no. I tell him it should," Fisch says.

"Men sometimes don't realize they're addicted to prescription drugs," says Dr. Joel Heidelbaugh, a family medicine specialist at the University of Michigan Medical School. "Maybe they're taking medicine for back pain, and a couple of years later they're still on them. They can't function without them, and they don't even know it."

Heidelbaugh says he's seen patients addicted to drugs such as Vicodin and Oxycontin without knowing it. "They never realized they need to get off of them," he says.

There is one area, Heidelbaugh says, where men zip right into their physician without hesitation. "Rashes in the groin, masses in the testicles, pain in that area -- that gets them into the doctor," he says.

Scherger adds, "Men are probably more keyed in to their groins than other parts of their body. They're pretty fixated on their penis and genital area. That's where they have the least amount of denial."

CNN's Jennifer Pifer and Sarah Edwards contributed to this report.