NEW YORK (CNN) -- MeLisa Cleary was 30 years old and a mother of three when her marriage started to fall apart. 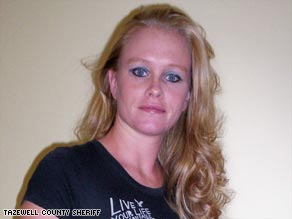 MeLisa Cleary's body was found near railroad tracks more than 20 miles from her home.

She was in the process of separating from her husband, Daniel, when she was last seen on June 6, 2008.

Her body was found three days later near the railroad tracks in Hartsburg, Illinois, a town more than 20 miles away from Mackinaw, where the Clearys lived.

Police said her body showed significant signs of blunt force trauma, particularly to her head and neck. The Logan County Coroner ruled her death a homicide.

According to friends and family, Cleary had expressed fear for her life to both her sister Brandy Gerard and her close friend Nicole Simpson.

She had been sleeping on the couch at home during the week and spending weekends at Simpson's house. She was scraping by on money she made taking care of other people's children.

Cleary was due at Simpson's house by 5:30 p.m. on Friday, June 6, but never arrived. She had spent the previous night there as well to avoid another quarrel with her husband.

When Cleary didn't arrive, Simpson called her family. On the morning of June 7, police were called and Cleary was reported missing.

Within hours of reporting her missing, Cleary's family found her 2004 Ford Expedition abandoned less than two miles from her home. Her keys and her purse were left inside the car.

Cleary's body was discovered June 9 by Canadian National Railway workers. That same day, Daniel Cleary was seen leaving the couple's home with their three children. The car was loaded with packed luggage.

Police issued an Amber Alert for the children, calling it a possible parental abduction.

Cleary, his mother and the children were found June 10 at a motel in Peoria, Illinois. He was taken into custody, questioned and released. The children were placed in protective custody.

The investigation remains open, but police still have not announced any suspects in the case, nor have they made any arrests. They are continuing to work on it "nonstop," said Capt. Bob Henderson of the Tazewell County Sheriff's department.

Because the case remains open and active, Henderson said he was reluctant to provide more than the basic details.

On November 15, family and friends celebrated what would have been MeLisa Cleary's 31st birthday, holding a candlelight vigil.

Her sister, Brandy Gerard, says she feels her sister's presence. "It's like she's saying to me, don't quit. Keep fighting for justice."

Cleary's family to this day insists that Cleary would never leave her children home alone, and she wouldn't go anywhere without telling someone she knew and trusted. Family members won't say more because they don't want to jeopardize the investigation.

The children, a girl, 12; a boy, 9; and another girl, 3, are in the custody of the state's Department of Children and Family Services, Henderson said. He would not discuss the situation in detail.

Cleary's mother, Jean Cohoon, says it's difficult when she visits with her grandchildren, "How can you answer a 3-year-old's questions about when her mommy and daddy are coming back," Cohoon says.

"If anybody has any pertinent information involving the disappearance and death of MeLisa, by all means give us a call," Henderson said.