LOS ANGELES, California (CNN) -- After shooting several people at the home of his former in-laws, police say Bruce Jeffrey Pardo, still dressed as Santa Claus, sprayed gasoline throughout the home intending to set it on fire. 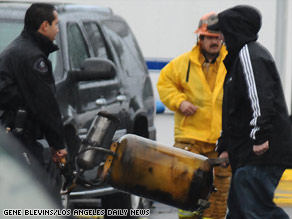 But his plan went awry.

The home exploded, windows were blown out, and part of Pardo's Santa suit melted onto his skin.

That's why police say he decided to kill himself rather than use the airline ticket to Canada that was in his pocket.

Police said Pardo showed up at the home dressed as Santa and had $17,000 cling-wrapped to his legs and inside a girdle.

Watch police talk about what was found on the gunman's body »

He knocked on the door. And when the 8-year-old ran to greet him, he shot her in the face.

Terrified people inside the home called 911.

"Stay away from the window!" a woman can be heard pleading, "Please come immediately ... he's shooting! He's shooting!"

See photos from the scene »

Some fled the house any way they could. Others sought shelter inside, some ducking under the dining room table, one witness said.

Pardo was targeting his ex-wife's family, police said, shooting some of them "execution-style."

Afterward, he prepared to set the home on fire using a homemade device designed to spread fuel.

Watch investigators at the burned-out home »

After the home exploded, Pardo removed his Santa suit, put on street clothes and began to knock out lights in the area as he fled the scene, according to a witness on a recording of a 911 call.

Pardo fled to his brother's home in nearby Sylmar, California, police said. When Pardo realized his brother wasn't home, he broke in and eventually shot himself to death, police said.

Police later found his rental car with the remnants of the Santa suit on the seat. It was rigged to explode if the costume was removed.

Watch how the massacre unfolded »

Investigators have yet to identify the charred remains recovered from the burned house.

Winter said the bodies were "severely burned and charred," and dental and medical records and X-rays will be used to establish identities.

Police said they have not accounted for Pardo's ex-mother-in-law, ex-father-in-law and ex-wife.

Police suggested marital problems as a motive for the attack and said Pardo and his wife of one year settled a contentious divorce last week.

This year that neighbor was away, police said.