NEW YORK (CNN) -- A construction company and three supervisors were indicted Monday on manslaughter and related charges in the deaths of two firefighters battling a 2007 blaze at the Deutsche Bank building in lower Manhattan. 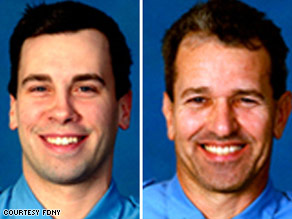 Prosecutors also reached an agreement with the city of New York requiring the implementation of new fire safety measures.

"Our goal is to put in place procedures which will prevent a disaster of the magnitude of the Deutsche Bank fire and to make sure that firefighters are never again exposed to the risks they faced in that fire," Manhattan District Attorney Robert Morgenthau said.

The indictment is the result of an investigation into an August 18, 2007, blaze that consumed nine floors of the Deutsche Bank building.

The building had been scheduled for demolition after being contaminated by debris, asbestos and other hazardous substances after the September 11, 2001, terrorist attacks on the World Trade Center buildings.

The two firefighters killed in the blaze -- Robert Beddia, 53, and Joseph Graffagnino, 33 -- were caught in a smoke-filled stairwell that prosecutors say was improperly blocked off by barriers erected to seal off floors being stripped of contaminants.

In addition to the deaths of Beddia and Graffagnino, 105 other firefighters were injured combating the blaze.

The agreement with the city of New York mandates the creation of a new civilian inspection unit at the city's fire department, the sole purpose of which will be to perform inspections at construction sites throughout the city.

"The regulatory measures we have put in place and the additional reforms set out today are designed to prevent any firefighter again confronting the conditions that firefighters faced at the Deutsche Bank building that tragic day," New York Mayor Michael Bloomberg said in a written statement.

The father of one of the firefighters killed in the blaze, Joseph Graffagnino Sr., said the indictments did not go far enough.

"I don't understand if the [city] agency can't be indicted, why can't individuals be indicted who we already know should have been responsible for doing their jobs and did not do their jobs," he said to reporters.

Graffagnino was referencing the lack of criminal charges brought against employees of the city fire department, the city's department of buildings and the building's landlord, the Lower Manhattan Development Corp.