WASHINGTON (CNN) -- A court Thursday rejected an appeal filed by a former administrative law judge who sued a dry cleaners for $54 million over a missing pair of pants. 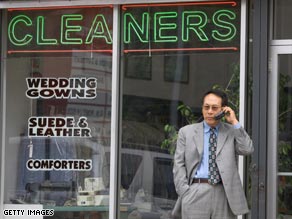 An unidentified man talks on a cell phone in front of the Chung family's shop, Custom Cleaners.

The District of Columbia Court of Appeals "ruled resoundingly in favor of the Chung family and denied Mr. Roy Pearson's appeal of the case completely," said Christopher Manning, an attorney for the Chung family, who own Custom Cleaners.

"The D.C. Court of Appeals held that the trial court correctly ruled that Mr. Pearson's claims had no merit whatsoever," he added.

The Chungs have "some level of relief," Manning told CNN, "but they won't count Mr. Pearson out for at least trying to torment them further" with future appeals.

"We are very happy with the result and thank everyone for supporting us," Jin Chung said in a statement issued by Manning. "The past three years have been very difficult, but we hope this nightmare is finally over."

The saga began in May 2005, when Pearson took several pairs of pants to Custom Cleaners for alteration as he prepared to start his new job as an administrative law judge. He alleged that among them was a pair of pants from a blue and maroon suit. When he came to collect his clothing, he said, the Chungs tried to give him a pair of charcoal gray pants that were not his.

During a two-day trial, Pearson, who represented himself, said that when he took the pants to the cleaners, his financial situation was precarious: He had just been ordered to pay $12,000 in attorney's fees to his ex-wife, and his credit cards were at their limit.

He claimed millions of dollars in attorney fees and millions more in punitive damages for what he called fraudulent advertising under the law. He also claimed that a sign in the store's window promising "satisfaction guaranteed" was an unconditional warranty that required the defendants to honor any claim by any customer without limitation.

The Chungs' attorney argued that no reasonable person would interpret the signs to mean an unconditional promise of satisfaction. District of Columbia Superior Court Judge Judith Bartnoff agreed, ruling that Custom Cleaners did not violate the city's Consumer Protection Act.

Manning, whose law firm handled the appeal on a pro bono basis for the Chungs, said the Chungs hope the "vague and often unfair" act will be changed "so that others do not suffer like they did."

In August 2007, the Chungs dropped their bid to recover legal costs in the hopes that Pearson would drop his appeal.

Pearson may request that the appeal be heard again by the entire panel of D.C. Court of Appeals judges, Manning said. He also could petition to the U.S. Supreme Court for an appeal.

"It is the Chungs' hope that Mr. Pearson will not attempt to appeal any further and will end his frivolous and baseless attacks on the Chung family," Manning wrote in the statement.

"The 3½ years this case has been pending and appealed have been very difficult for the Chungs," he said. "They lost two of their dry cleaning stores and their realization of the American dream."

He said the family wants to "quietly return to their one remaining small dry-cleaning store ... to rebuild their lives."

Pearson was taken off the bench in May 2007 while the lawsuit was pending and was not reappointed as an administrative law judge when his term expired.

He filed a federal lawsuit in May 2008 to get his government job back, accusing city government and others of an "unlawful demotion and subsequent termination." That suit remains pending.