Shamus to the stars gets 15 years in prison

LOS ANGELES, California (CNN) -- Hollywood's disgraced private investigator to the stars shuffled in shackles into a federal courtroom Monday and was sentenced to 15 years in prison in a celebrity wiretapping scandal. 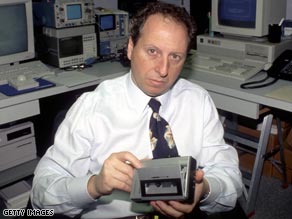 A threat to a reporter launched an investigation that brought down celebrity shamus Anthony Pellicano.

The sentence for Anthony Pellicano was close to the 16 years sought by federal prosecutors. A probation report had recommended a sentence just under six years.

U.S. District Judge Dale Fischer also ordered Pellicano and two other defendants in the case to pay $2 million in restitution.

"You were unquestionably the organizer and leader," the judge said, referring to Pellicano's role in the vast wiretapping scheme. The judge added that Pellicano inflicted "emotional, physical and psychological harm onto his victims" and counted the justice system among the victims.

After the sentencing, Prosecutor Dan Saunders applauded the 15-year term, saying Pellicano never considered the law when trying to help his wealthy clients.

"If anything he was very jubilant, and proud and excited with his ability to break the law," he said.

Dressed in a green jailhouse jumpsuit, Pellicano, 65, blew a kiss to family members as he was led into court. Later, he shifted in his chair as he told the judge, "I have already taken complete and full responsibility for all of my actions."

Pellicano was convicted in May of 76 counts of racketeering, wire fraud, identity theft and wiretapping after a two-month trial.

Pellicano and high-profile entertainment lawyer Terry Christiansen also were convicted in August of conspiring to wiretap the private conversations of billionaire Kirk Kerkorian's former wife, Lisa Bonder Kerkorian. The Kerkorians were locked in a child-support battle in early 2002.

According to witness testimony, many of Pellicano's wiretaps involved conversations between lawyers and their clients. "The importance of the attorney-client privilege cannot be overstated," the judge said

Pellicano represented himself in both trials, which included testimony from MGM mogul Kerkorian and comedian Garry Shandling, as well as 34 recordings Pellicano made with attorney Christensen. The men could be heard joking about the phone conversations of Kerkorian's ex-wife.

Pellicano's new lawyers said outside the courtroom that they would appeal. "There are numerous appellate issues with both the conviction and this sentence," said Michael Artan.

Pellicano faced up to 20 years to life in prison for the racketeering convictions alone. Christensen, a partner in one of Hollywood's top entertainment law firms, was sentenced to three years in federal prison.

The infamous Hollywood wiretaps case began when Los Angeles Times reporter Anita Busch was threatened in June 2002. A dead fish, a rose and a note demanding "Stop!" were left on the windshield of her car.

In court, Busch propped a crutch against the back row of courtroom seats and limped forward to tell the judge how Pellicano's actions had harmed her.

"I thought it was just a matter of time before I would be killed [by Pellicano]," Busch said. She added that she was so frightened by Pellicano that she feared turning on the ignition on her car because she thought it might blow up.

Busch turned to Pellicano and scolded, "You threw away your responsibility as a son to your mother and as a father to your own children -- for money." She then delivered a parting shot: "I fear for your soul when I think that God is just."

Investigators raided Pellicano's offices on Sunset Boulevard as part of their investigation into the threats against Bush and exposed his wiretapping enterprise. The case captured Hollywood's attention as A-listers and insiders speculated on who would be caught up the scandal.

Sylvester Stallone and Keith Carradine were wiretapped; Shandling was subjected to an illegal criminal background check. The names of other stars, including Chris Rock and Courtney Love, came up in testimony during the trials.

All About Criminal Sentencing and Punishment