ATLANTA, Georgia (CNN) -- A Georgia judge threw the book at Brian Nichols on Saturday, giving him four consecutive sentences of life without parole for a 2005 shooting rampage that started in an Atlanta courthouse. 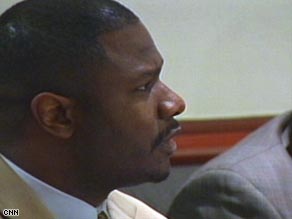 Brian Nichols tells the court Saturday in Atlanta, Georgia, "I will not bring dishonor to the decision to spare my life."

Nichols, 37, was convicted last month of 54 counts for a deadly shooting rampage that began March 11, 2005, in the same courthouse where he stood trial.

Nichols, who was being tried for rape, shot three people to death as he escaped from the downtown courthouse that day and a federal agent the next day in Atlanta's Buckhead district before being captured in neighboring Gwinnett County.

"I know that the things that I've done caused a lot of pain, and I am sorry," Nichols, who remained seated, told the court before sentence was pronounced. "And I just wanted to say that I will not bring dishonor to the decision to spare my life."

Nichols was spared a death sentence Friday after the jury deliberating his fate announced that it could not agree on a sentence.

Bodiford gave Nichols the maximum sentence on all the non-murder charges, and ordered them to be served consecutively.

Those terms ranged from five years for escape to life for armed robbery. Other charges included aggravated assault with a deadly weapon, robbery by force, theft by taking, hijacking a motor vehicle and false imprisonment.

"It's a large number of years. It's many lifetimes," Bodiford said.

Bodiford ordered that Nichols serve his time in the Georgia state penal system, forgoing the possibility of sending him to the federal maximum-security prison in Colorado.

"There's ample evidence that trusting him will get you killed," he said in concluding the sentencing hearing.

Jurors told Bodiford on Friday night that they were deadlocked, with nine in favor of death and three in favor of life without parole.

Under Georgia law, the jurors must reach a unanimous decision in order to impose a death sentence. In the absence of a unanimous jury verdict, the decision fell in the hands of Bodiford.

Defense lawyers said Nichols, who confessed to the killings, suffers from a mental disorder.

The jurors unanimously found the necessary aggravating circumstances in the four murders, but they were split over the death penalty.

After nine weeks of testimony, the jury found Nichols guilty of 54 counts, which included the four murders plus numerous aggravated assaults, carjackings and kidnappings.

The shootings began in the Fulton County Courthouse, where Nichols was set to stand trial for rape. He overpowered a sheriff's deputy and took her gun before proceeding to the courtroom of Judge Rowland Barnes, killing him and court reporter Julie Ann Brandau.

Sgt. Hoyt Teasley chased Nichols to outside the courthouse, where Nichols fatally shot him.

Nichols killed off-duty U.S. Customs Agent David Wilhelm as he worked on a house in Buckhead the next day. He was captured later that day after a standoff with police in the apartment of a woman he had taken hostage in Gwinnett County.

The case drew nationwide attention, in part because of the cost of Nichols' representation: about $2 million at last accounting.

Nichols had attempted to plead guilty in exchange for a life sentence, but the Fulton County District Attorney's Office would not take the death penalty off the table.