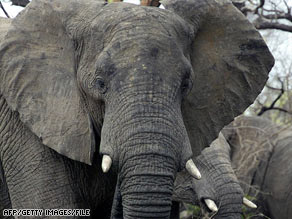 Imports of African elephant ivory have been banned in the United States since 1976.

The defendants arranged to have ivory from Cameroon, Ivory Coast and Uganda shipped into the United States disguised as wooden snakes, guitars and statues, authorities said.

"The defendants plundered precious natural resources for personal profit," U.S. Attorney Benton J. Campbell and other officials said in a statement. "Their illegal trade threatens the continued existence of an endangered species and will not be tolerated."

Federal agents tracked at least eight shipments, including one worth an estimated $165,000.

Federal agents used surveillance and shipping, phone and bank records to track the suspect shipments. Arrests were made in New York, New Jersey, Virginia and Texas.

The U.S. Fish and Wildlife Service and the Immigration and Customs Enforcement division of the Department of Homeland Security were involved in the law enforcement operation.

One suspect told an undercover federal agent during a purchase that it was difficult to bring ivory into the United States, but easy to sell it at high prices, the government statement said.

Two other suspects also are accused of paying a courier $15,000 to bring a shipment of ivory from Cameroon into the United States.

The U.S. banned ivory imports in 1976, and the Convention on International Trade in Endangered Species of Wild Fauna and Flora effectively outlawed trade in elephant tissue in 1989.

Illegal trade in African elephant ivory is considered to be a major cause of the continuing decline of elephant populations in Africa.

The defendants are expected to appear in court in New York on Wednesday. They face jail terms of up to 20 years if convicted.

All About Endangered Species • Africa • U.S. Department of Homeland Security