(CNN) -- A grand jury has indicted polygamous sect leader Warren Jeffs on a second sexual assault charge in connection with a probe of his Texas compound, prosecutors said Wednesday. 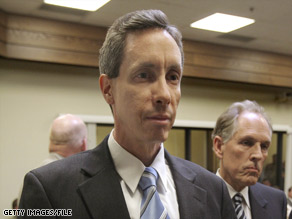 The charge against Warren Jeffs stems from a probe into his sect's Yearning for Zion Ranch near Eldorado, Texas.

The Schleicher County, Texas, grand jury charged Jeffs, who already could be sentenced to life in prison after being convicted of a different charge in Utah, with a first-degree felony count of aggravated sexual assault.

The indictment is Jeffs' second in Schleicher County.

In July, he was charged with sexually assaulting a child under 17.

The Texas charges stem from a state and federal investigation into the sect's Yearning for Zion Ranch outside Eldorado, about 190 miles northwest of San Antonio. In April, child welfare workers removed more than 400 children from the compound, citing allegations of physical and sexual abuse.

After a court battle, the Texas Supreme Court ordered the children returned in June, saying the state had no right to remove them and there was no evidence to show the children faced imminent danger of abuse on the ranch.

To date, 12 people associated with the compound have been indicted as part of the investigation, Texas Attorney General Greg Abbott said.

Jeffs, 52, is the leader and "prophet" of the estimated 10,000-member FLDS, an offshoot of the mainstream Mormon church. The FLDS openly practices polygamy at the YFZ Ranch, as well as in two towns straddling the Utah-Arizona state line -- Hildale, Utah, and Colorado City, Arizona.

In Utah, Jeffs was convicted on accomplice to rape charges for his role in the marriage of a sect member to a 14-year-old. He is awaiting trial in Arizona, where he faces similar charges.

He faces a sentence of up to life in prison for the Utah conviction, and he also could face another life term if convicted of the Texas charges.

His attorney in Arizona, Michael Piccarreta, has questioned the motives of Texas authorities, telling CNN in a July interview that the state's investigation into Jeffs and his followers is an effort "to cover themselves up on the botched attack on the ranch in Texas."