NEW YORK (CNN) -- Former New York Gov. Eliot Spitzer will not be charged in connection with the prostitution scandal that prompted his resignation, the U.S. attorney's office for the Southern District of New York said Thursday. 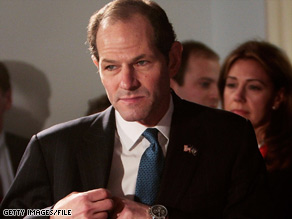 "After a thorough investigation, this office has uncovered no evidence of misuse of public or campaign funds," U.S. Attorney Michael Garcia said in a statement.

The attorney's office also said it found no illicit activity related to Spitzer's withdrawal of funds for, and his payments to, the Emperors Club VIP, which authorities have said was a prostitution ring.

"In light of the policy of the Department of Justice with respect to prostitution offenses and the longstanding practice of this office, as well as Mr. Spitzer's acceptance of responsibility for his conduct, we have concluded that the public interest would not be further advanced by filing criminal charges in this matter," Garcia said.

Spitzer resigned in March after it was revealed that he was among the Emperors Club's patrons -- "Client 9," according to court papers detailing the service's workings. Court documents detailed arrangements for a nearly two-and-a-half hour rendezvous between Client 9 and a high-class prostitute -- identified as "Kristen" -- at the Mayflower hotel in Washington in February.

Spitzer was linked to the Emperors Club when when IRS and FBI officials noticed suspicious transfers of larger sums of money between several of the governor's personal accounts, sources told CNN.

Those sources say red flags were raised when the money ended up in the bank accounts of shell companies linked to the Emperors Club.

Police seized more than $1 million in cash from Brener's apartment at the time of his arrest.

All About Eliot Spitzer