NEW YORK (CNN) -- Over the past year, searchers have taken to the woods, waterways and even the skies over Bolingbrook, Illinois. They've looked, and then they've looked again. 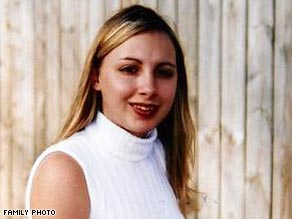 Stacy Peterson disappeared on October 28, 2007, and police consider her husband the prime suspect.

But there's been no sign of Stacy Peterson, the 23-year-old fourth wife of former Bolingbrook police sergeant Drew Peterson.

Police have named Peterson a suspect in his wife's disappearance. He maintains he is innocent, and says she ran off with another man.

The Peterson case has become a cable television staple and has spawned several books.

But as Stacy Peterson's disappearance approaches the one-year mark, police seem no closer to solving the mystery than they were on October 28, 2007.

That morning, a Sunday, Drew Peterson, now 54, says he awoke at his suburban tract home to find his wife gone. He says he received a phone call from her at 9 p.m. She said that she was leaving him, Peterson says.

Police confirm there was some activity on Stacy Peterson's cell phone around 9 p.m. on October 28, but her family and close friends say she would never leave her two children behind or go away without mentioning it to her family.

In the days leading up to her disappearance, Stacy Peterson confided in friends and her sister. She said she was afraid of her husband and wanted to leave him, according to her sister, Cassandra Cales.

"If anything happens to me, he killed me. It wasn't an accident," Cales quoted her as saying.

Watch how the case has unfolded »

At 10 a.m. that Sunday morning, Stacy Peterson called a friend and scheduled an afternoon appointment. It was the last time anyone in her close circle of family and friends heard from her. She never showed up for the appointment, and was not seen or heard from again.

Worried, Cales called the police that Monday, October 29, and reported her sister missing.

The media frenzy and police scrutiny soon revealed that Drew Peterson's third wife had died mysteriously a few years before while in the throes of a nasty divorce. Kathleen Savio died just before the division of the marital assets was finalized, making Drew Peterson the sole beneficiary.

Savio was found drowned in the dry bathtub of her home. At the time, the death was ruled an accidental drowning. But her family continued to insist that Savio died as a result of foul play.

Witness statements that have been leaked to the media portray Drew Peterson as jealous, possessive and controlling. He was said to keep such close track of his wife that he frequently called her on her cell phone and appeared unannounced at social outings to take her home. This caused tension in the marriage, the witnesses told police.

Police named Drew Peterson as the prime suspect in his wife's disappearance in November 2007. He has not been charged in the case, but he has been charged with illegal gun possession, which could put him behind bars for up to five years if he is convicted.

Drew Peterson continues to insist that his wife left of her own accord and ran off with another man. Asked why he believes this, he responds that she called him and told him so.

He also says that she had a number of younger male friends during their marriage. He adds that although it is embarrassing for him to admit it, he often had to deal with her flirtations. He paints himself as a victim left holding their household together and raising their children while living under an umbrella of suspicion and near-constant police and media scrutiny.

Watch how he failed a lie detector test »

The investigation remains open and police and family urge anyone with information about Stacy Peterson's whereabouts to call 815-740-0678 or the family tip line: 866-847-5143.

A $35,000 reward is being offered for information that leads to Stacy Peterson or to the conviction of the person responsible for harming her. She is 5 feet 2 inches tall, weighs 100 pounds and has brown hair and brown eyes. She has a blue and yellow carnation tattoo on the small of her back and red cherries tattooed on her left front hip.