Simpson jury: We relied on tapes, not witnesses

(CNN) -- The jury that convicted O.J. Simpson of robbery and other charges relied mostly on audio and video evidence -- and very little on testimony from prosecution witnesses -- jury members said Sunday. 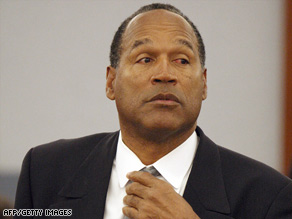 O.J. Simpson, convicted of robbery and kidnapping last week, could be sentenced to life in prison on December 5.

"We honestly felt we could not rely on that witness testimony," said Michelle R. Lyons, one of seven jurors who spoke to reporters in Las Vegas, Nevada, on Sunday. "There was not one decision we made that was based only on witness testimony."

Jury foreman Paul Connelly said some of the prosecution's witnesses didn't seem trustworthy. At least three former Simpson co-defendants who cut deals to testify in the case had criminal records.

Asked whether the jury trusted the witnesses, Connelly answered: "Not entirely, no."

Prosecutors produced an audiotape of the confrontation in which authorities said Simpson and five men burst into a Las Vegas, Nevada, hotel on September 13, 2007. The men allegedly made off with pillowcases containing Simpson sports memorabilia.

Several jurors said audiotapes of the incident and conversations between Simpson and others that were recorded surreptitiously before, during and after the heist made the prosecution's case.

"It would have been a weak case" without the tapes, juror Dora Pettit said.

The jury of nine women and three men found Simpson and co-defendant Clarence "C.J." Stewart guilty Friday of 12 charges, including conspiracy to commit a crime, robbery, assault and kidnapping with a deadly weapon.

Simpson, 61, could get life in prison. Sentencing is scheduled for December 5 in Las Vegas.

Prosecutors alleged that Simpson, a former football star, led a group of men who used threats, guns and force to take the memorabilia and other items from memorabilia dealers Bruce Fromong and Al Beardsley.

Four men who had been charged with Simpson cut deals with the prosecution and testified against him. One testified that Simpson instructed him to bring a gun to the hotel encounter.

"Everything was based on the recordings," juror Dora Pettit said of the panel's decisions.

Simpson, who did not testify during the trial, told police he didn't know the people with him were armed. He also claimed the items had been stolen from him, and the hotel encounter was just about him retrieving his items.

Simpson's lawyer has indicated he plans to appeal the conviction, partly because some of the jurors had indicated during jury selection that they disagreed with a 1995 verdict in which he was acquitted of killing his ex-wife, Nicole Brown Simpson, and her friend Ronald Goldman.

Teresa Owens, one of the jurors in the Simpson robbery case, said any suggestion that the jury found Simpson guilty because of the verdict 13 years ago is "terrible."

"There's reports right now that we've had some kind of vendetta against Mr. Simpson for ... 13 years ago," she said. "That in no way had anything to do with this case whatsoever."

"I don't think it was on anybody's minds. For that, I can say I'm proud of the jury," he said.

Before the robbery and kidnapping trial, the jurors promised they could disregard Simpson's past and solely consider the evidence against him and Stewart, 54.

Owens also said it would be "preposterous" for anyone suggest that the makeup of the jury -- 11 jurors were white, and one said she was Hispanic, while Simpson is black -- hurt the defense's chances.

"They chose us. Five hundred people ... filled out these questionnaires," Owens said. "They had the [opportunity] to pass us."

Pettit said the jury has been painted by some "as an all-white jury that hates O.J."

"That's just not true," she said. "It couldn't be further from the truth."

Asked whether they felt the crime was bad enough to warrant life sentences, Connelly said that was up for the court to decide.

Pettit said that "if he walked out tomorrow, I'd be fine with that."

However, she said Simpson had to be found guilty and that his argument about just wanting to recover his own things didn't work.

"Under Nevada law ... even if you're recovering your own stuff, you can't do it in the manner that they all went in and did it," Pettit said.