LAS VEGAS, Nevada (CNN) -- A jury of nine women and three men -- none of them black -- was seated Thursday for the trial of O.J. Simpson on kidnapping and armed robbery charges. 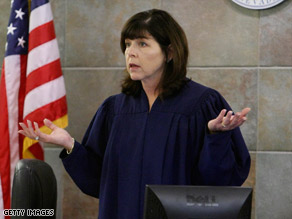 The judge made no official mention of the jury's makeup, but prosecutors revealed in court that no blacks were on the jury. A black man and black woman, however, are among six alternate jurors.

Defense attorneys had argued the prosecutors were deliberately trying to exclude blacks, but Judge Jackie Glass denied their challenges.

Opening arguments are scheduled to begin Monday in the case against Simpson and a co-defendant, Clarence Stewart.

If convicted on all counts, Simpson faces a possible sentence of life in prison. He has pleaded not guilty and has told CNN he was trying to get his property back.

Four of five Simpson's original co-defendants have struck deals with the prosecution to testify against Simpson. One testified in a pre-trial hearing that "O.J. Simpson wanted me to have a weapon." Another testified that Simpson "wanted me to help him acquire some guns."

An attorney for Simpson, Yale Galanter, has disputed that.

"O.J. Simpson did not know that there were guns in that room," Galanter said.

All About O.J. Simpson • Criminal Trials